The last days of winter here took their toll.  You may recall the particularly fierce storm a few weeks ago.  In St Heliers, two residents’ houses were severely damaged.  I stopped by the morning after it happened to see the extent of the damage and to offer assistance.  From looking at the destruction, it’s amazing no one was hurt but I was pleased to chat with the owners and their family and to see that all that needed to be done, was being actioned.

Keen eyed locals may also have noted that Okahu Bay has been cleared of moored boats.  This is to allow greater use of the bay for marine sports.  Alongside this, it was great to have the community out last weekend cleaning up including divers clearing rubbish from the sea floor of the bay recently. Okahu Bay is a beautiful spot, and now even more so thanks to these efforts.

Keeping on the environmental front, it was also pleasing to see the Stonefields Residents Association Inc, with the support of the Orakei Local Board, beginning a project to repair more than 350 planter boxes around trees on berms in the first phase of their Streetscape Enhancement programme. With many now a decade or more old, they are starting to look worse for wear.  If you are keen to help, let me know and I can put you in contact with the local organisers there.

It is not all buildings and environment however.  I spent some time at Glen Innes Primary earlier this week, serving food as part of their lunch programme.  Unlike the recent government announcement, this project is aimed at educating children and their families about what a healthy lunch is.  Working with Steve and the team from the Breakfast Club, food is sourced locally (e.g. from New World Eastridge) and once a week the children come in and make sandwiches and learn about healthier options than chips and soda.  The Breakfast Club are running a Christmas Store and all support is welcome, from donations to time.  If you would like to help, let me know.

While exceptionally busy around the electorate, I have actually spent the majority of my time in recent weeks in Wellington as the parliament has been sitting.  The list of failed deliveries by the government continues to grow, but I thought I would focus on just two in this newsletter. 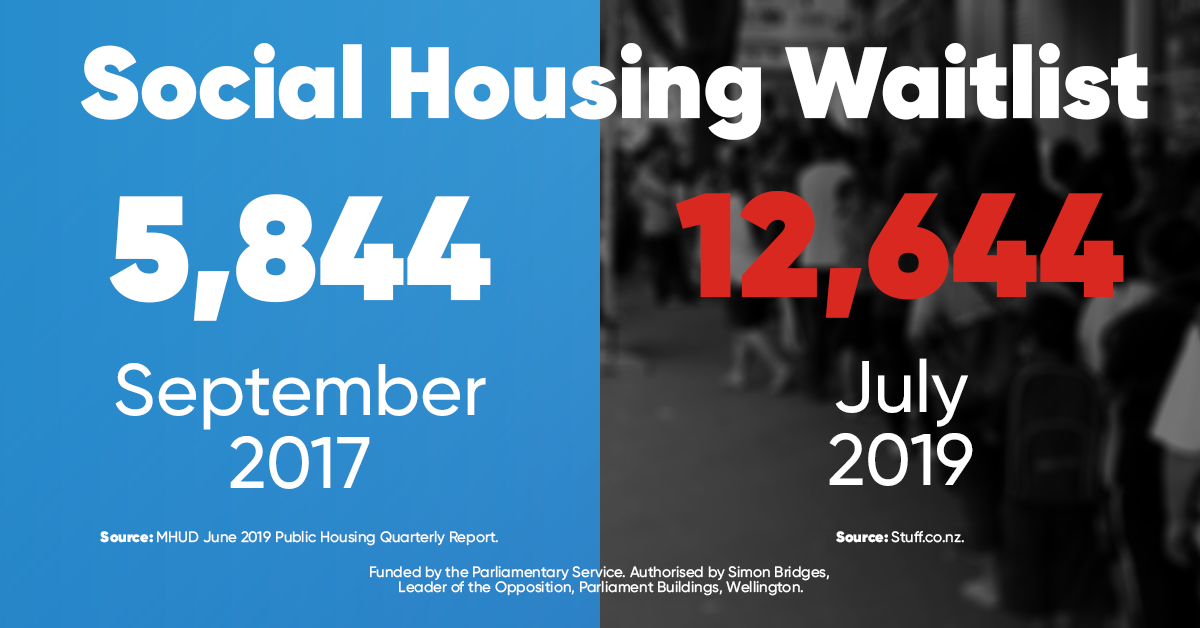 You may have seen in the media that the waiting list for public housing has hit a record high, drawn to attention by my comments put out in a press release.

It’s disappointing but unsurprising that the social housing waiting list has more than doubled under this Government from 5,800 to almost 13,000.

Unfortunately, this Government’s policies are a perfect storm for state housing.

Not only has it put new expenses on home owners, new regulations, and told landlords to take their money elsewhere, it has also taken away tenancy reviews, meaning someone can have a colossal pay rise and keep a state house.

It isn’t kind or caring to have policies that see rents rise faster than any time in our history, or to keep people in state houses after they no longer need them.

Sadly, increasing numbers of New Zealanders are struggling to put a roof over their heads, and the Government’s policies are only making it harder for them to make ends meet.

As I write, the government has also capitulated on its KiwiBuild project.  They are no longer promising to build 100,000 houses over ten years.  Instead, they are now replacing this election bribe with what is any government's business as usual - to build as many houses as quick as possible. The Labour government can dress this up any way they want, but this is another policy failure and meanwhile, every day, the social housing waiting list goes higher and higher ...

Unfortunately, while the government may get some good media and PR from the announcement, it’s yet another example of this government naively thinking they can solve everything by throwing tax dollars at government intervention.  I should also add, the government has given no thought to schools' capacity to manage this – more workload on teachers, the need to expand or create kitchen spaces, work to manage food allergies, and an array of other food safety requirements.  So, again, a nice PR opportunity for the government but one that lacks deeper consideration of what is actually required and needed.

But there is good news and hope! National has been working hard on the biggest policy development process by an Opposition in over a decade.

Business confidence is continuing to tank and there's been a sharp decline in the New Zealand economy under Labour. We know that when businesses lack confidence in the economy, they are less likely to expand or invest.  New Zealand needs a strongly growing economy if we want a world-class health system, better education for our kids and the modern infrastructure network we desperately need.

Our Economy Discussion Document provides new ideas on how we can turn around New Zealand’s slowing economy, restore business confidence, revive our economy and grow the incomes of New Zealanders.  Among our plans if elected are:

If you would like to add your voice to this discussion, please follow this link and fill out the survey about what we can better do to get our economy moving.

Once again, all the best as we begin the springtime and I look forward to updating you again soon.