It has been a few weeks since I last wrote with so much going on around our electorate but also in Wellington. I have to say, I am very pleased with the recent polls. I think this reflects both good work by Simon Bridges and the wider team, but also a government being shown up for not actually doing anything.

There have been a number of Tamaki locals succeeding on the national stage as well happenings locally such as the opening of a new mathematics building at Selwyn College and, of course, the recent local body elections. Congratulations to all who were elected here in both the Orakei and Maungakiekie Tamaki Wards. As a keen C&R supporter, my particular congratulations to Councillor Desley Simpson on being returned as well as a ‘clean sweep’ by C&R candidates for the Orakei Local Board. 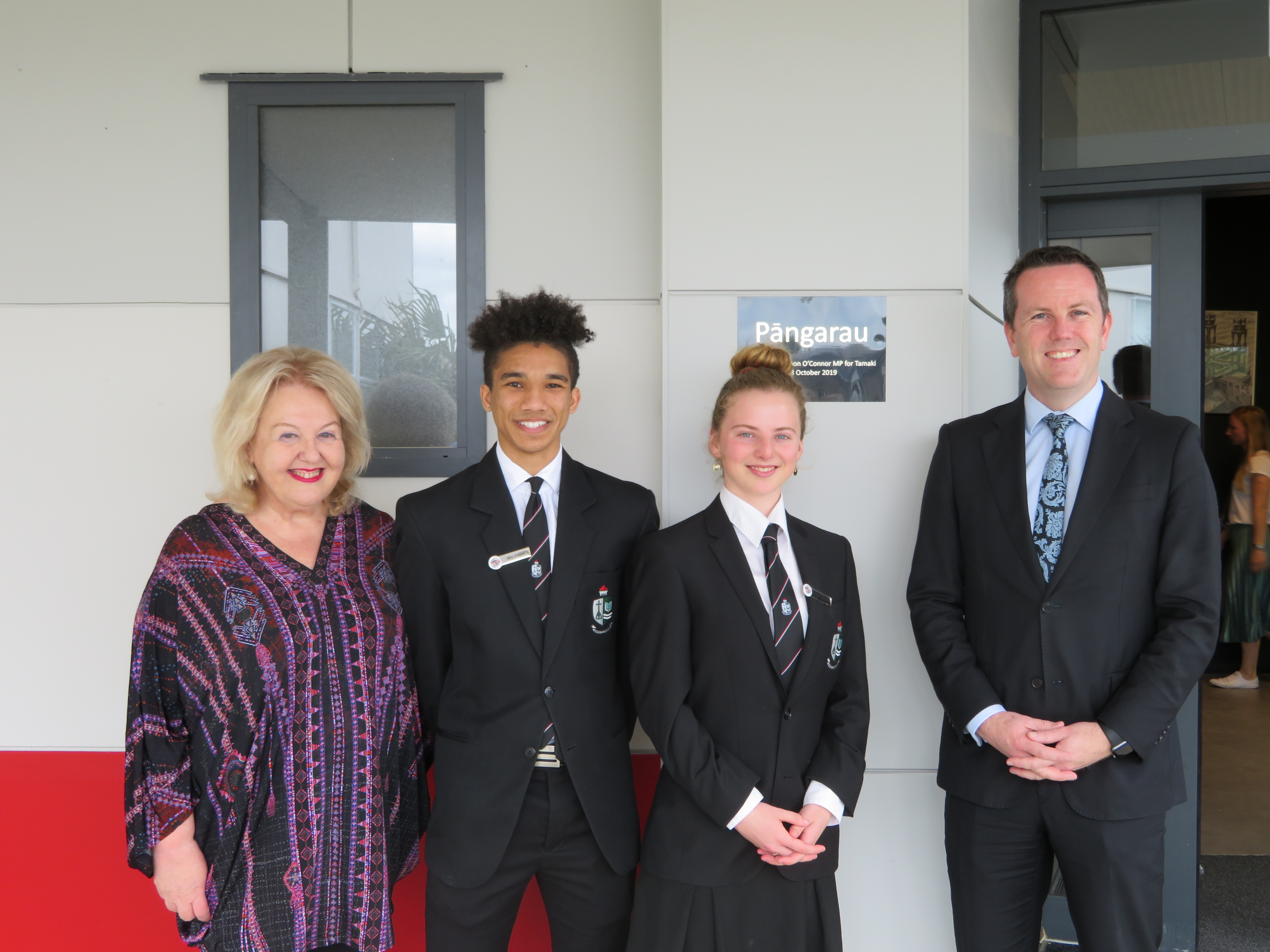 The last few weeks have been ‘full-on’ around the electorate. Most recently, I was pleased to officially open refurbished mathematics classrooms at Selwyn College. This is a great new asset to the school alongside the new arts building. Looking across our electorate, there is a lot of school refurbishment occurring which is great to see, with much having been started under the last government.

I was also able to join our younger locals to celebrate Mission Bay Kindergarten’s 75th birthday. It was a stunning day on which to celebrate and amazing to see how many previous teachers and students showed up to share their memories. Thank you for the welcome chance to speak.

Keeping with a local school theme, you may recall in my last newsletter that I wrote about the work Steve Farrelly and the Breakfast Club are doing for our local school and community. It was therefore pleasing to see TVNZ’s Good Sorts run a piece on him over the weekend. You can view it here and learn a little more about how many local community groups and businesses work with him, and how he, in turn, helps our local schools.

We also have many locals achieving nationwide recognition lately, so I wanted to acknowledge them too. Congratulations to Tamaki local and all-round great guy, Sir Ron Carter, who is the 2019 BLAKE Medallist. It is well-deserved recognition for years of service, along with his wife, to the community. In more recent days, three local businesses have been recognised for their excellent sausages as part of the Great NZ Sausage Competition. Yes, there is such a competition!

Avon’s Butchery will be well known to everyone. They won the People’s Choice Award alongside three other awards, including a gold medal for their Beef, Garden Herb and Garlic sausage. If, like me, you shop there often, you will not be surprised. The Produce Company and The English Sausage Limited also won awards, with both being based out of Tamaki. Again, to them congratulations. 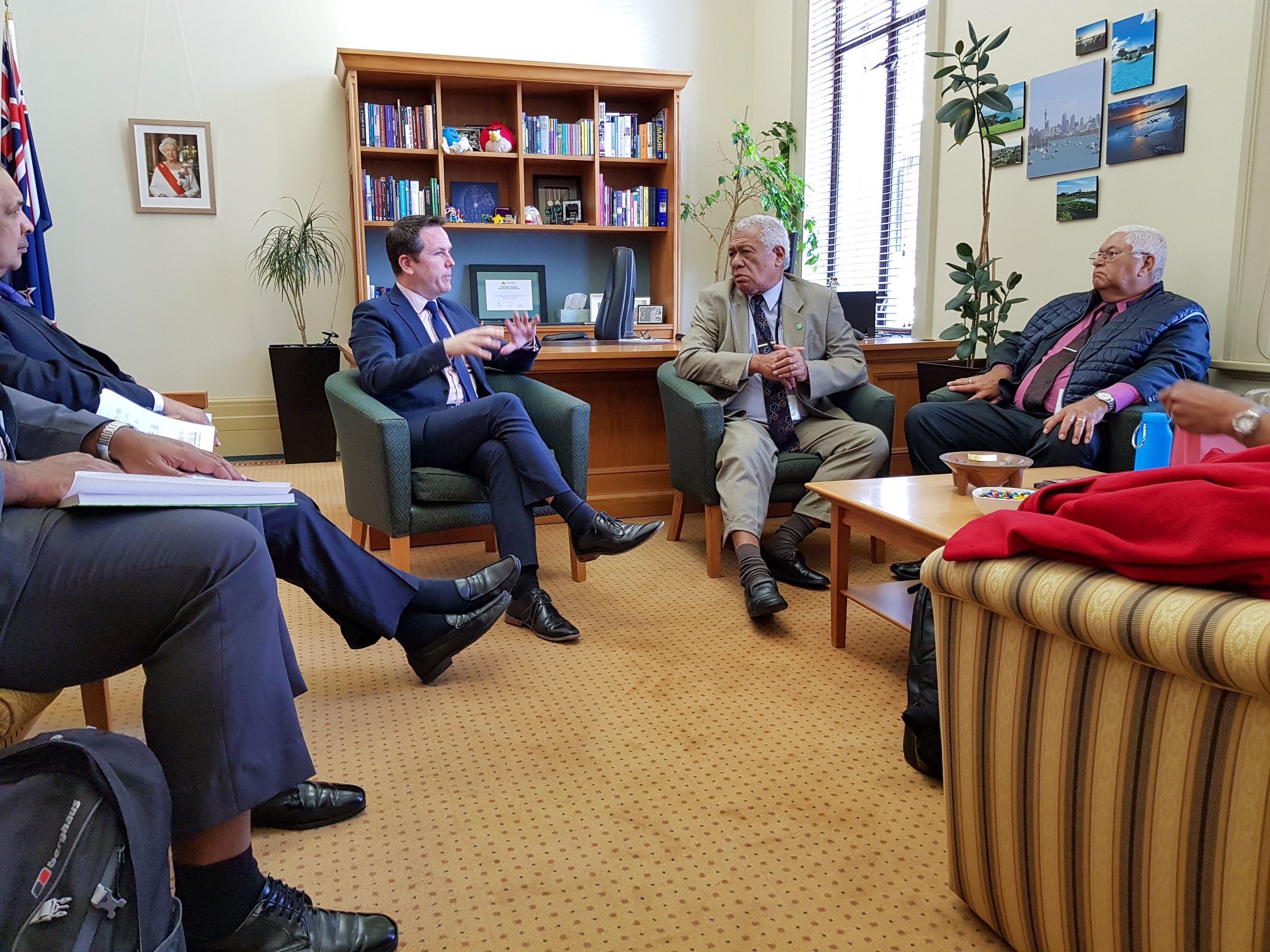 Welcoming a delegation of Fijian MPs to Parliament

As I turn my thoughts to Wellington and parliament, I have to report that unfortunately for young families and New Zealanders struggling to buy a home, Labour’s Kiwibuild programme has utterly failed. The Labour government dropped its goal of 100,000 homes in ten years and announced a new target of ‘as many homes as possible’. I don’t need to tell you that this is a poor goal and embarrassing that the government would set it. National from the very start said this was a straight-out election bribe that would never be achievable. The recent government capitulation is just another example of failure in this supposed ‘year of delivery’.

As a red herring, the government has recently renamed Housing New Zealand ‘Kainga Ora’. It is an attempt to blend together not only Housing New Zealand but also the failed KiwiBuild unit and the development company, HLC (Homes, Lands, and Communities—though formerly known as the Hobsonville Land Company). It is essentially just rearranging deck chairs on the Titanic when what is needed is more homes for people and better support of our community housing providers. Instead, the best the government can do is a name change which I suspect very few will ever use.

Strictly, the government is disestablishing Housing New Zealand. I am in the process of asking the Minister how much this going to cost both in terms of all the new branding and collateral that is needed, alongside the costs that any reconstitution causes. All of this is, of course, paid out of your taxes and, as I noted above, does not house one more family in need.

I also note that for all the talk of new houses, the waiting list for social housing has more than doubled since Labour took government. It now sits at over 13,000 New Zealanders, and I predict this will only get worse. Furthermore, the fact they have budgeted over $100 million more for emergency housing grants—an absolute blowout—is an admission that they expect things to get worse. 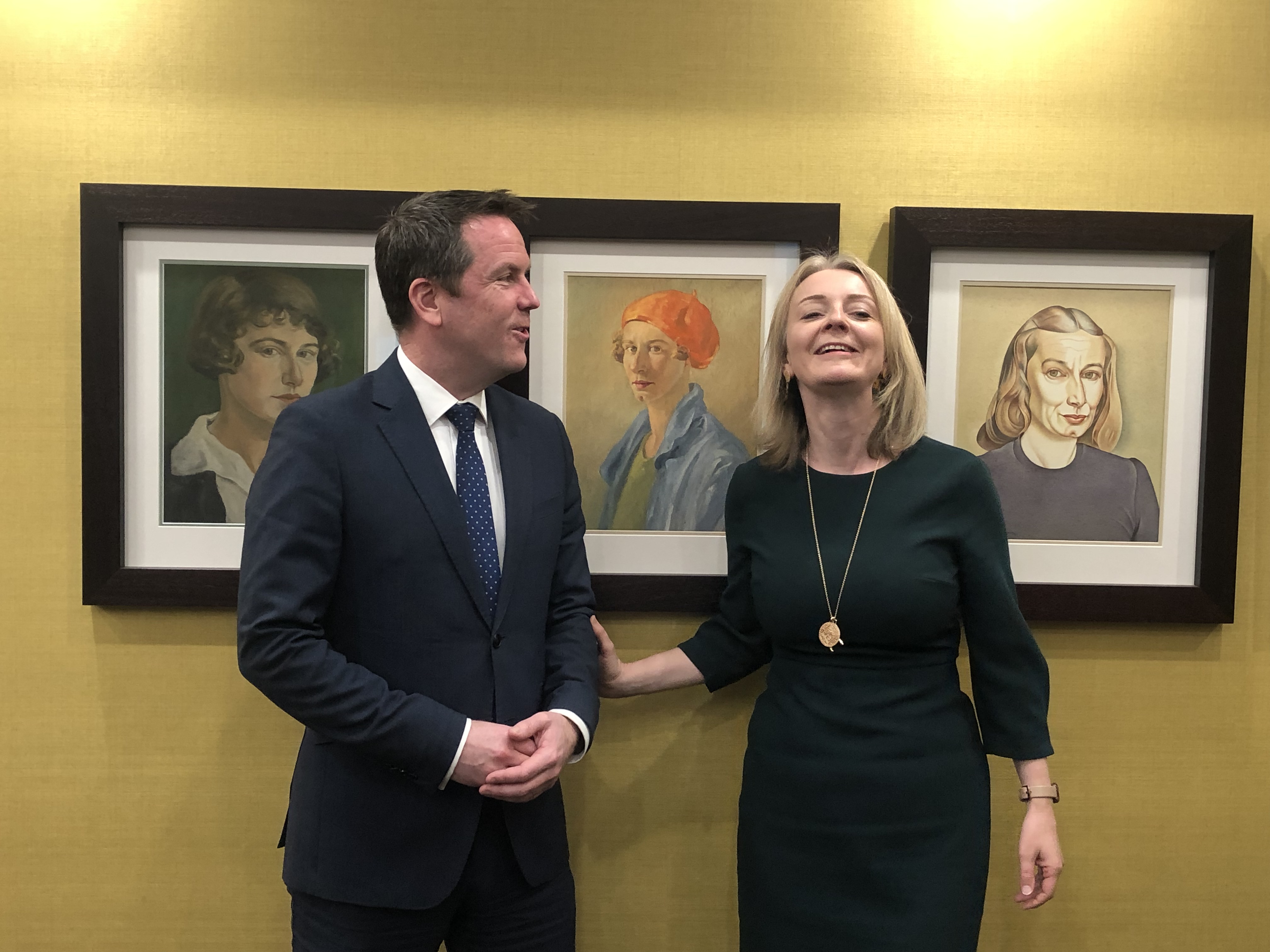 Meeting with Liz Truss, Minister for Trade from the UK, to discuss Brexit and trade opportunities

You have probably heard myself and others in the National party use the term ‘virtue signalling’ to describe the Labour government and their various policies and announcements. I thought I would share a few thoughts as to exactly what I mean by this as it is central to how this current government works. Alternatively, you are welcome to watch one of my recent speeches in parliament where I slammed the government’s virtue signalling in light of allegations within the Labour leader’s office. The video can be found here.

Virtue signalling is effectively declaring things publically to show off your good character and to affirm you are right on particular issues. Essentially, it’s when you say something to generate approval from those who are listening and to make yourself look good rather than actually getting on with what needs to be done, no matter how popular it is or how good you look while saying it.

For example, announcing a food in schools programme (for just 30 of our over 2000 schools, I might add) rather than focusing on the much harder work of addressing factors which cause intergenerational poverty, such as the breakdown of families or a lack of education. Or, talking a lot about human rights and how much you care about the most ‘vulnerable’ and ‘marginalised’ while voting for bills that would negatively affect and take life away from the elderly, sick, disabled, and unborn.

I, like many New Zealanders, was brought up with the values of humility, integrity, and hard work. That means you roll your sleeves up and tackle the problems that need tackling regardless of how virtuous it makes you appear and without concern whether people are talking about you or not. When I reflect on this Prime Minister and this government, the hard work is lacking but the photoshoots and foreign trips to the UN are not.

Education Changes in the Wind

Finally, I wrote an op-ed recently around what the government is looking to do in education. In short, the changes have me worried as they take away more and more parental rights and instead seek to have the state and left-wing ideas replace the family. I won’t repeat what I wrote here, but if you want to read my thoughts, you can follow this link here to have a read on my website. 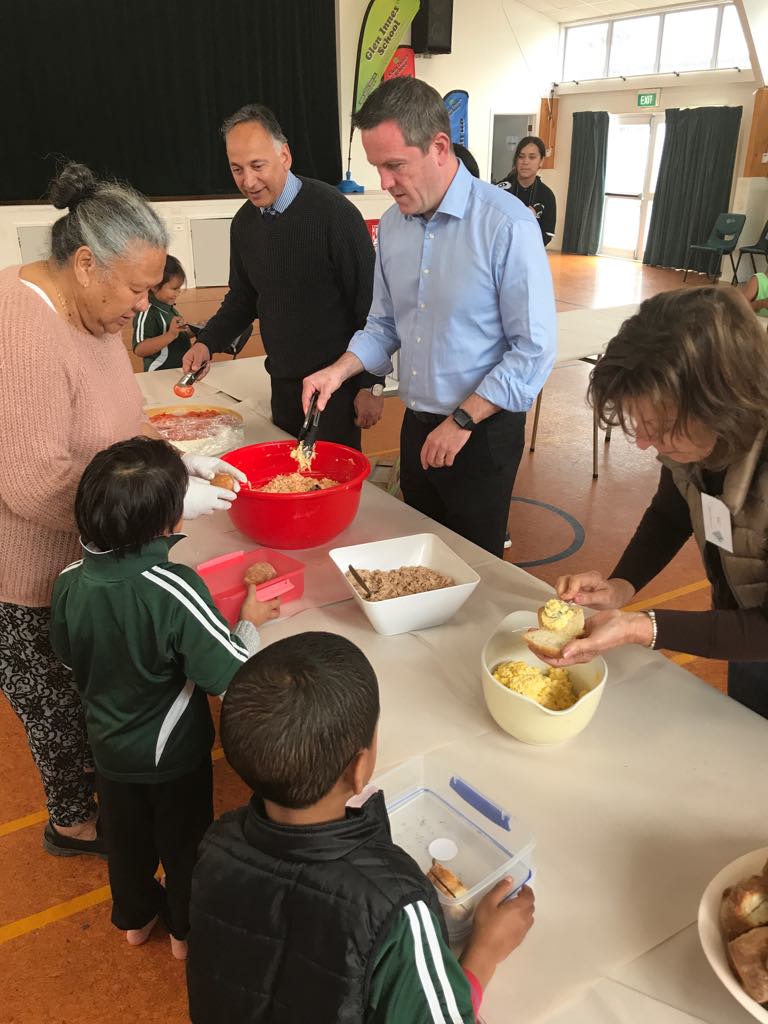 Helping out at Glenn Innes School with the food in schools programme, The Breakfast Club

There is a lot happening across the electorate, but two of note:

The Great Tamaki Debate is back! This year, I am delighted to be hosting MPs Anne Tolley, Mark Mitchell, Sarah Dowie MP, and Matt King. They will be having a fun debate on the question: ‘Should MPs be elected for the course of their natural life?’ The debate is on Monday, November 4 at the Churchill Club and I would love to see you there—get your tickets here today, or drop me a line.

Kohimarama Bowling Club is hosting food trucks on Sunday, 10 November from 9.00am to 2.00pm. There will be an array of great food and a chance to check out the bowling club. Well worth heading along to.

It is good to be in touch and I look forward to touching base with you again soon.