There has been some good news - it appears we have had some success around the Auckland Transport issues in both Mission Bay and St Heliers.  AT appears to be taking on board the community’s strong feedback and is approaching its changes far more cautiously. We are not out of the woods yet by any means, but thank you to everyone for their voices and support to date.  I will keep up the pressure at my end and keep you informed as things progress.

There have been a lot of others things going on as well, and I share a few of them below.

As you may have seen in the media, I was honoured to accept two petitions asking Parliament for more treatment options for lung cancer. Alongside other cancer organisations and their petitions, it’s a loud call to government to overhaul pharmaceutical funding and increase access to life changing drugs such as pembrolizumab (Keytruda) for thousands of New Zealanders. I offer particular thanks to the Lung Foundation NZ for their tireless work and advocacy in this area. 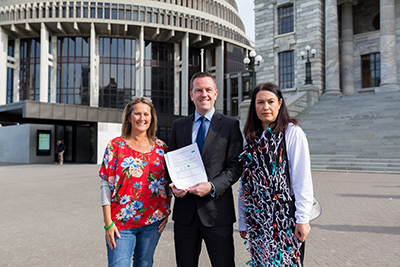 I personally feel it is time to re-look at the Pharmac model in its entirety.  One thing I have often noted is that while Pharmac is 26 years old, no other country or jurisdiction has copied it.  I think this speaks loudly.  I should also say, those in the agency work as best they can within the framework but it is clearly not fit for purpose anymore.

Last week I was invited, as Chair of the Foreign Affairs, Defence, and Trade Committee to inspect the HMNZS Manawanui.  This support ship is the newest addition to the Navy’s fleet.  The ship has been tailored to allow for a large range of missions.  It will provide the ability for diving and Hydrographic specialists to conduct specialised operations such as surveying of the coastline and harbours, underwater explosive disposal, underwater search and recovery and limited mine countermeasures. 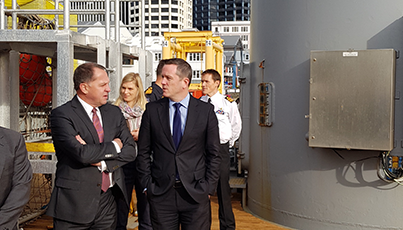 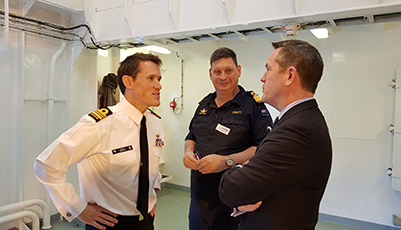 It was delivered to New Zealand in May and is expected to be in service by November.  I’d like to thank everyone who has contributed to this project.  I wish HMNZS Manawanui, and all who serve aboard her, good fortune.

Here are the Manawanui’s specifications:

Inconsistencies in the progressive left

You’ve probably seen me point out the inconsistencies and ironies on the progressive left in the past (and no doubt noticed them yourself). While I’m irritated to be spending time on something I shouldn’t have to, it’s important that these issues are pointed out when they arise. Unfortunately, so many inconsistencies have become so common lately that I need to dedicate part of my newsletter to them.

Firstly, following on from the topic of drugs, I took the chance this week in Parliament to speak in support of my friend and colleague Simeon Brown.  His bill on psychoactive substances would increase penalties for those who supply drugs, specifically, synthetic drugs. I took the chance to point out the contradictions in the Green Party’s thinking around the issue during the debate. Their pro-drug approach is based on the assertions that laws don't change behaviours and that it is better to have drugs out in the open rather than be banned and underground. However, if they believe in this approach then why are they wanting to ban words and introduce hate speech legislation? Do they really think words are more harmful than drugs? Do they really think it a good idea for the state to tacitly approve of drugs but disapprove, with force, of words that offend? I acknowledge, these are philosophical questions about consistency that take deep thinking, but those in public office who are running the country have a duty to think deeply and serve wisely.

Secondly, it seems, at least in recent times, that when someone on the left attacks someone on the right they are a hero, but when it’s the other way around it’s an inexcusable assault. Prime Minister Scott Morrison is the latest MP in Australia to have an egg thrown at him, this time it caused an  elderly lady to be knocked to the ground.  This most recent attack can hardly come as a surprise given the tremendous reception the so-called ‘egg boy’ received when he assaulted Senator Fraser Anning (whose comments I should note were ridiculous). The narrative that assault is ok, so long as it is directed only at the conservatives is deeply disturbing.  The simplistic, and wholly inaccurate idea that ‘left is good, right is bad' is dangerous and leaves everyone, regardless of political philosophy far worse off. If we become a society where it is ok to abuse, attack, or assault some people for their political views, but not others we are headed to a very dark place.  Ironically, the level of left-wing inspired violence and injustice around the world has been shockingly high for decades (if not a few centuries) and remains so even in the early 21st century.

Thirdly, and following on from the above point, we all deplore terrorism, but the left seems to focus on what it labels right-wing terrorism but is strangely silent when it comes to groups that don’t fit their narrative of ‘oppressor’ and ‘oppressed’. One clear example  of this is the reaction to terrorism in Palestine. Where is the mention that terrorists in Palestine have fired more than 700 rockets from Gaza into Israel? This wasn’t over the past year, or the past month, it was during a recent weekend. Where is the outrage? This government has never been slow to condemn actions or thoughts it dislikes, so what should we infer when it does not condemn Hamas and Palestinian Islamic Jihad? Their bias is obvious and it hampers the cause of peace not only in the Middle East, but all over the world.  There should be one attitude towards terrorism, it is unacceptable, regardless of who perpetrates it or who suffers from it.

Following on from the above point, I wish to convey my condolences about the very sad news of an attack on a Jewish synagogue during a Passover celebration in San Diego on 27 April. Attacks on places of worship are increasing and must be condemned in the strongest possible terms. My thoughts are very much with the families affected, both in America but also with our Jewish community here in New Zealand.

Last but certainly not least, my thoughts and condolences are also very much with the family of NZSAS Lance Corporal Nicholas Kahotea, his SAS comrades and those of the wider New Zealand Defence Force.  I had the good fortune to meet him several times and he was a consummate professional and good soldier.

Finally, I would like to draw everyone’s attention to an experiment some of my colleagues and I are trying out in Parliament.  Over the coming weeks and months, we will try to pull together a group of MPs for a conservative discussion on issues in the news.  We will feature different MPs depending on the topics, especially if they bring interesting perspective on how conservativism can improve our world.  Our hope is that this will be a way for people to hear a range of ideas and perspectives which otherwise don’t tend to get much media attention.  This is very much a work in progress, so please bear with us… and with our current audio quality.  We will make improvements as we go along!

Take a look and tell us your thoughts.  We’d also be quite keen to hear what subjects you’d like us to talk about.