It has been a little while since my last newsletter, mostly as there has been so much going on.  As I write, I am actually returning from a visit to Melbourne of all places.  Sadly, one of my Australian colleagues - Senator Kimberley Kitching - passed away recently, and so I flew across to attend her funeral.  She and I had worked closely together as part of the Inter-Parliamentary Alliance on China (IPAC).  I will touch on this a little later including my impressions of international travel once again.

More locally, crime remains the number one issue.  As many will know, we have had yet more ram raids and other crime in our electorate since I last wrote. On Sunday, Jay and his family who run the Orakei Superette were hit for a fourth time.  Once again the offenders were young ones, in this case taking only lollies.  Picco Eatery was also hit and if you were following the news, you will have seen in the New Zealand Herald and also our local East and Bays Courier doing further articles after I drew the ongoing problems to their attention. 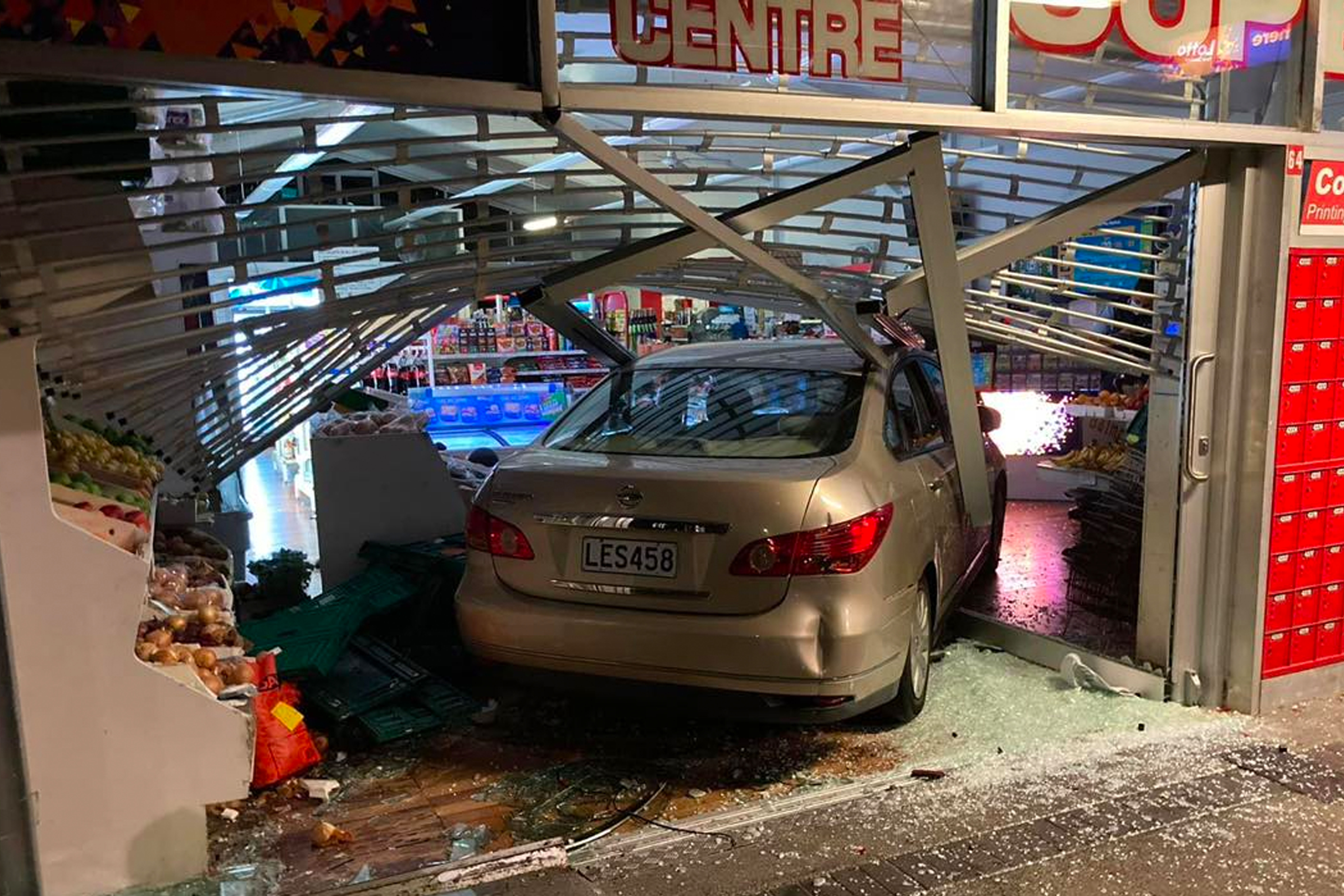 Jay and family had their Orakei Superette ram raided last Sunday for the fourth time.

Naturally, when it comes to crime, we need more police but also it is clear that our laws and structures are not working to address the young people involved.  I remain in close contact with our local police and seek to visit all those shop owners effected, where possible.

PUBLIC MEETING TO BE ANNOUNCED

I will soon announce a date for a public meeting on crime.  As you know, this is something I have been keen to hold and now that government has changed the rules around how many people can attend (from limiting to 100 persons, to now allowing up to 200) I think we can proceed.  We may still have to limit who comes as I suspect, with such strong interest, we will easily have a full house.  I will let you know the day, time, and location once we sort this out in a few days. 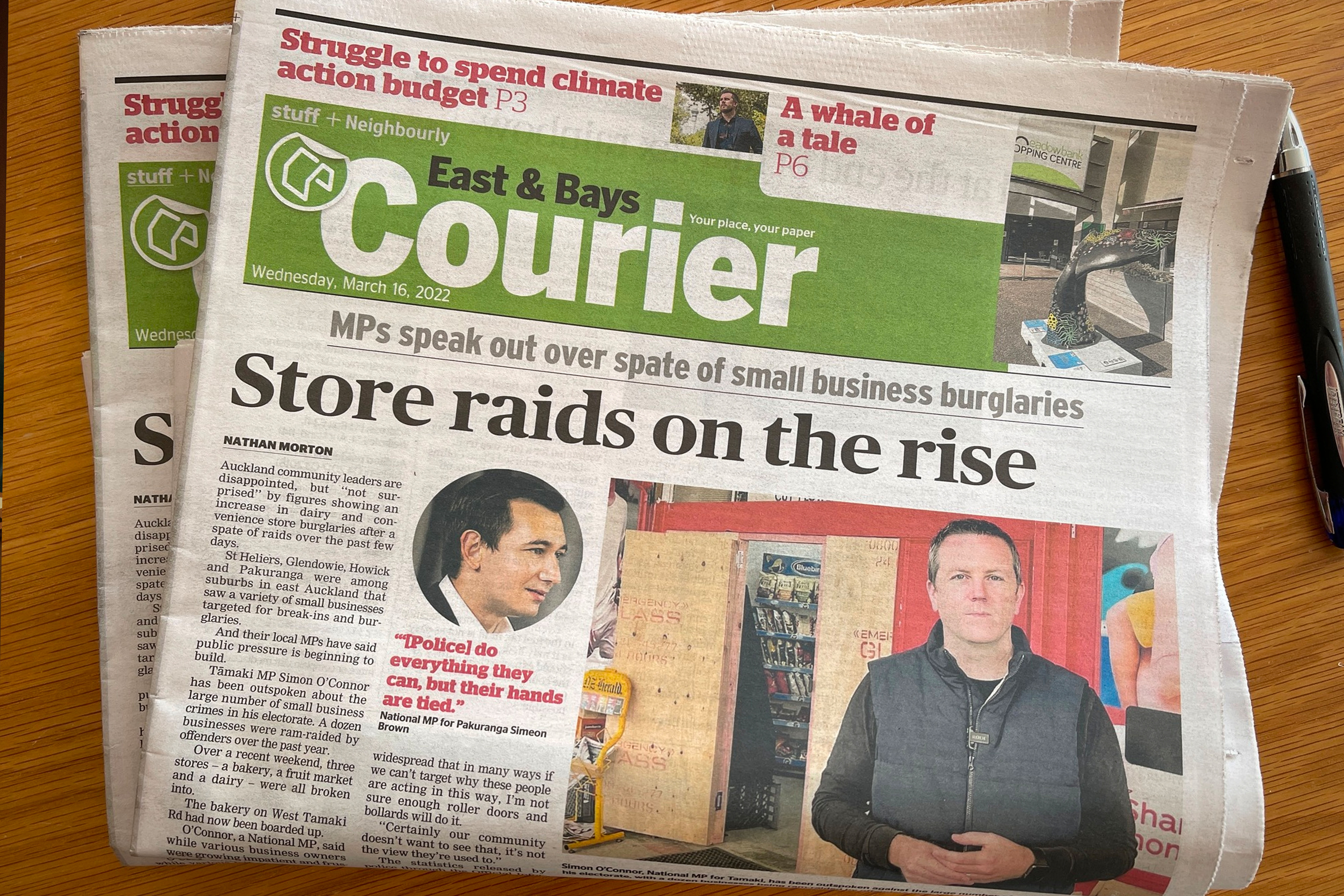 Making News: Front page of the Courier - I continue to be vocal about the spate of ram-raids and anti-social behaviour on behalf of Tamaki

Keeping local, it is also clear that many are doing it very tough currently.  The cost of living continues to rise and our local businesses are doing it hard.  You will have seen many local cafes and restaurants closing some days, or limiting hours.  Much of this has to do with the management of covid, with people isolating at home due to being a close contact.  Ironically, we know that some health professionals who are covid positive yet with no symptoms have been called back into work.  It is probably at the petrol pump you are feeling the increase of costs the most, as have my family and me.  It is well past time we dropped the Regional Fuel Tax along with the limited excise cut the government introduced.  I would add, the cost of living was already escalating under Labour, well before the issues in Ukraine started.

Speaking of Ukraine, I was very pleased to push hard for, and support, the Russia Sanctions Law that passed through the House two weeks ago.  While supporting it, I was also making the point that such a law needs to be much broader - that is, a Magnitsky type law that enables New Zealand to sanction any serious human rights abusers.  Put it this way, other human rights abuses - such as those happening against the Uyghurs by the CCP - have not ended simply because Russia invaded Ukraine.  You may have seen an opinion piece I wrote on this recently in the New Zealand Herald. 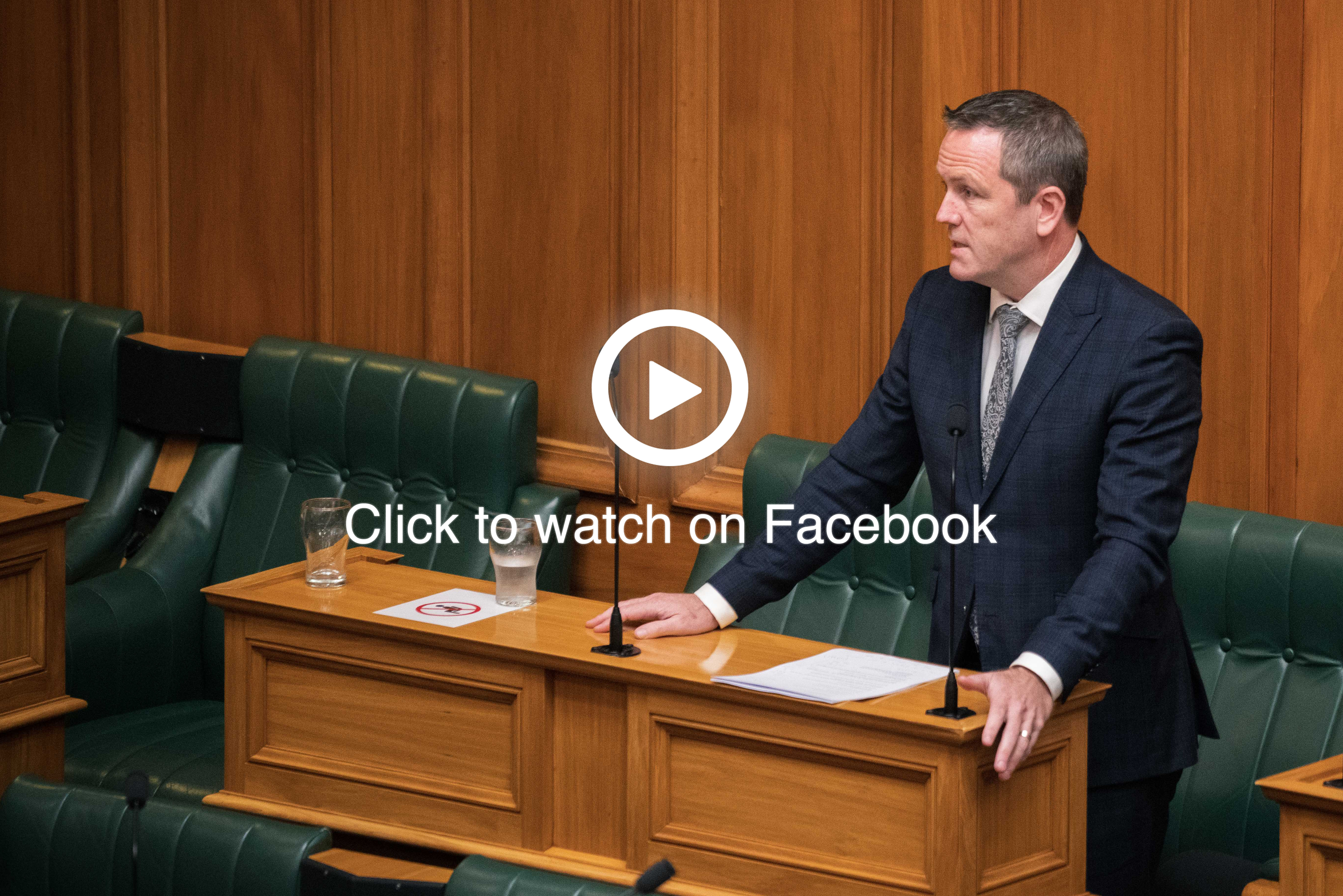 Much of my work has been focused on the Russia-Ukraine situation as I hold the Associate Foreign Affairs role.  Alongside this, Corrections is also a major portfolio for me.  In recent days, I have drawn attention to the fact that the Department of Corrections doesn’t even know the vaccination status of all its employees.  I find this mind boggling; a government that imposes mandates on the public sector and yet doesn’t make it a priority to understand its workforce.  Alongside this, I have also been drawing attention to a very Labour type dynamic - that is, spending more money but getting less.  Did you know you are now paying more per prisoner (almost $30,000 more per person) and yet they are receiving even less rehabilitation than in the past?  As I say, typical Labour and a disappointment not just for the taxpayer but I would argue for the prisoner and their family as well.

We have also seen government announce changes to mandates, vaccine passes, scanning, and the traffic light system.  While a step forward, I feel a step that has come rather late.  I wrote an op-ed on this recently outlining my thoughts and you can access that here if you would like to hear more of my considerations on the matter.  But briefly, better late than never: the government needs to drop all the rules, now.

As mentioned earlier, I have recently traveled to Australia for a funeral but also some meetings with colleagues.  Such travel was not taken for granted and I feel fortunate to have had the flexibility to go.  The Senator passed away at age 52, so a shock to all concerned.  She and I had only just been on a panel I contended 48 hours prior to her death, discussing with experts, MPs, and media the need for Magnitsky/autonomous sanctions in New Zealand. 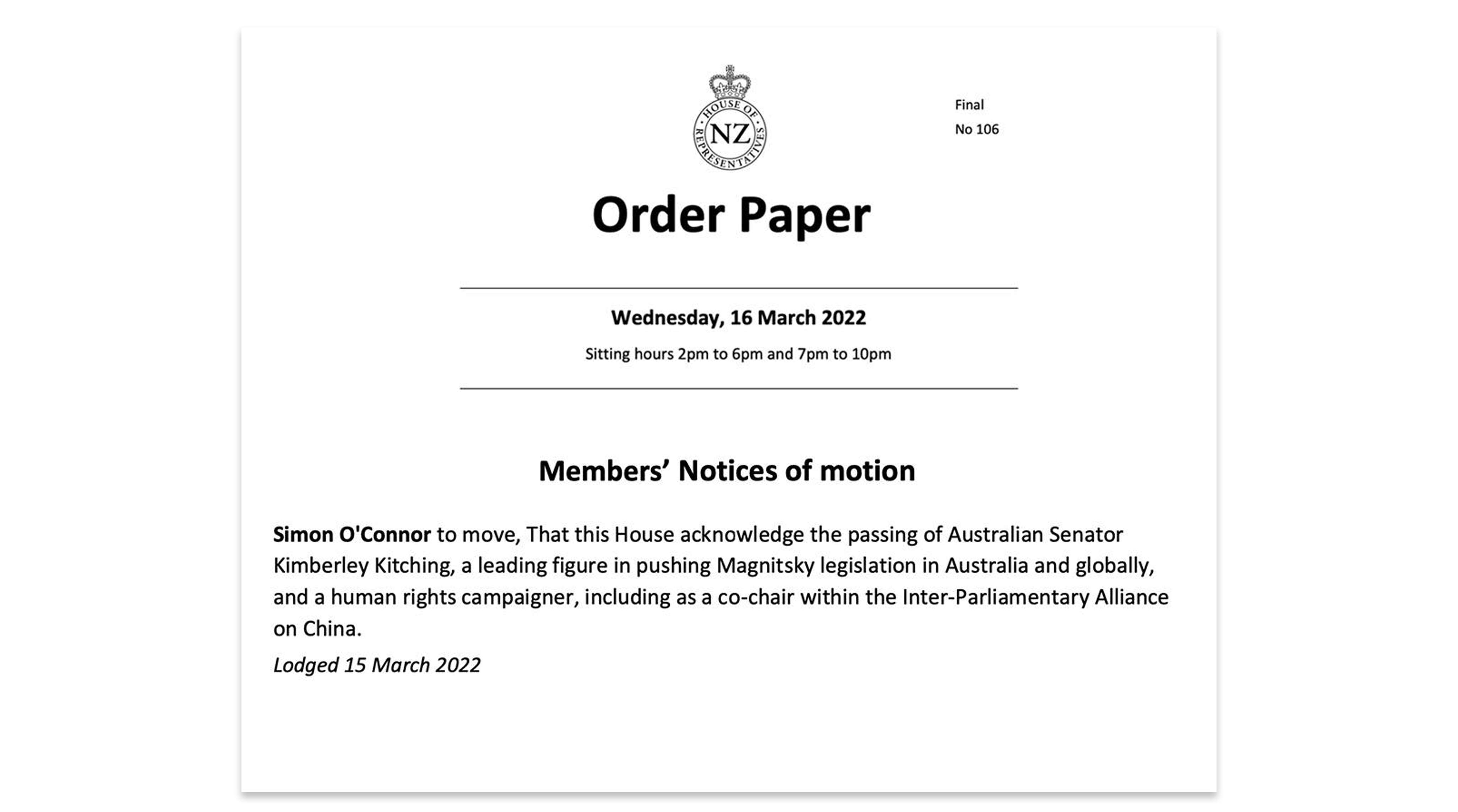 In memory of Senator Kimberley Kitching, and honouring her service, I placed this Notice of Motion before the New Zealand parliament today

The funeral was in Melbourne and having so many Australian politicians gathering provided me a welcome chance to catch up with those I have worked closely with around foreign affairs, defence, and intelligence matters, such as Senator James Paterson (who heads up the Joint Committee on Intelligence); Andrew Hastie (Assistant Minister of Defence); and then the President of the Senate, Slade Brockman; the Speaker of the Parliament, Andrew Wallace; and Queensland Senator Amanda Stoker among others.

I also had a great chat and unexpected chat with Sky TV host Andrew Bolt.

If there is one impression from all these meetings, it is that our world is more dangerous and troubled and that countries like New Zealand and Australia need to work more closely together including around defence and intelligence.

Beside the politics, there are two other sets of observations.  The first around the economic consequences of Victoria’s lockdown, and how this is similar to New Zealand.  The second was around how international travel has changed.  What was striking in Melbourne was how many shops were closed or working on very limited hours.  The city is broken as a consequence of the ongoing rules and lock downs.  Many of the rules are now relaxed other than masks on public transport.  By and large, most people are now moving about as they used to without passes, masks, and so forth.

As for the travel side, it is certainly much more involved.  Much comes down to filling out extra forms and then getting the required tests. The latter is challenging insofar as balancing the need to get a test result in time but ensuring said test is close enough to the take-off time.  It was clear going through the airport that many are still challenged by all of this.  Let’s just say, if you find yourself travelling in the coming weeks, leave plenty of time to check in.

If you have been thinking about joining the National Party, or renewing your membership – now is an excellent time to do so.  For members aged 60+ I welcome you also to be a part of our SuperBlues Group where we come together for regular meetings with special guests and discuss issues affecting our community. You can join by clicking here.

On the note of SuperBlues, next Monday 25th March I am hosting National Party Leader Christopher Luxon for our SuperBlues Morning Tea.  As we are still under Covid restrictions, RSVPs are essential and capacity is strictly limited.  Only a few seats remain, so if you would like to attend – email me at [email protected] for further details.

Lastly – once I have locked in the date for our public meeting around crime, I will be in touch as soon as possible.  In the meantime, best wishes for the days ahead.