Congratulations to Margaret Wilson, a Tamaki local, on being recognised in the Queen’s Birthday Honours.  She has been made a Member of the New Zealand Order of Merit (MNZM) for her services to our community, particularly through her service on the National Council of Woman and the Mothers’ Union.  Thank you for your tremendous service Margaret, and congratulations!

Here’s my latest update for you: Just a word of warning - this is a long one so make a cup of tea and get settled in for a good read!

You probably followed the drama around the budget announcement a couple of weeks ago.  It is safe to say that the budget was a disaster for the government.  Due to a startling level of incompetence, details in the budget were able to be accessed by the public before the official announcement. Then, Labour and Treasury accused National of hacking the system - something they knew to be a false accusation, but one they made anyway.

To top things off, the women who appeared on the cover of the budget had moved to Australia because they found the cost of living in New Zealand too high to make ends meet! 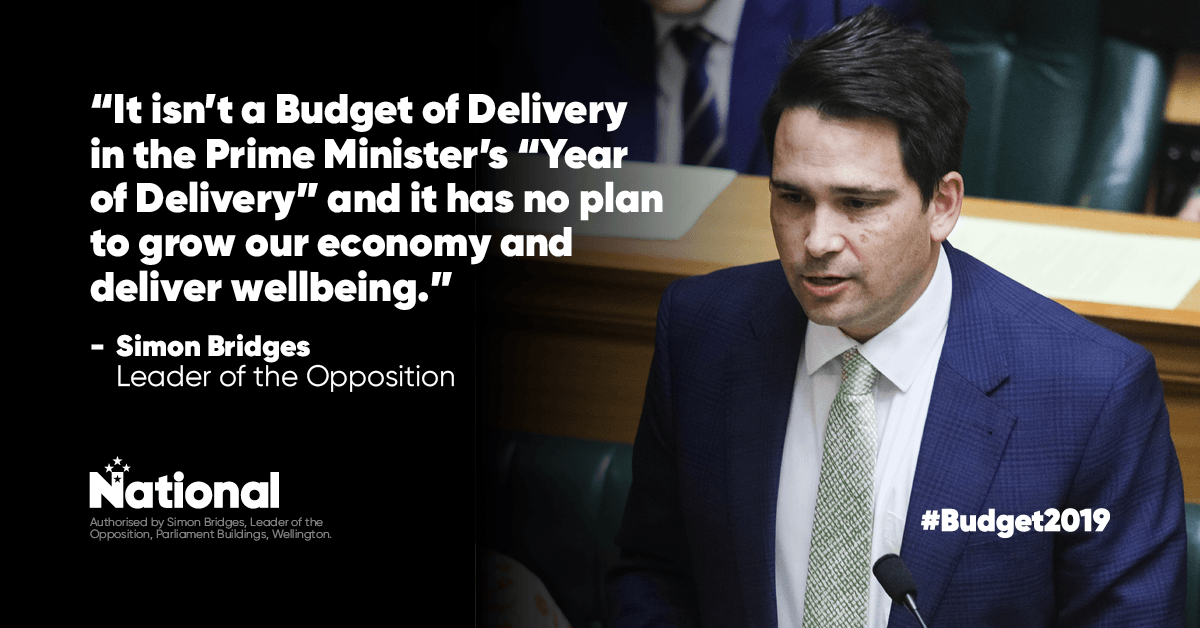 But these details, while telling, shouldn't be mistaken for the most botched aspect of all - the budget itself. To quote party leader Simon Bridges:

“This is not a wellbeing budget. Most New Zealanders will be left asking themselves what’s in it for them. Families want more money in their weekly budgets for food, petrol and rent. Instead, their taxes are going towards rail, the defence force and trees.

“It’s no wonder Grant Robertson has had to drop his self-imposed debt target and increase the spending limit by $17 billion so he can fund the Government’s bad spending decisions. Surpluses are forecast to be billions of dollars lower than they were just a few months ago.

“This budget is style over substance. It might have a glossy cover with nice pictures, but it’s hollow inside. This botched budget is not transformational and will be a disappointment to New Zealanders.

Now, to be fair, the substantial spend on mental healthcare is a good step and will do something to address an important area of healthcare that has not gotten much attention.  That said, it is alarming that the new funding available for the entire healthcare budget is smaller than this one single area.

The government has been forced to increase spending, from $25 million dollars a year to $120 million per year on emergency social housing.  They are very happy to blame this increase on the previous National Government, but it sounds quite hollow now.  I have to wonder when, if ever, they’ll admit that their own failed housing policies are what has made this mess.  They can only be in government for so long before they have to take a little responsibility themselves!  (I’ll say more on that in moment.)

So, once again, we find that the government has no idea how to spend money wisely.  However, they were very quick to find new ways to raise it.  Under the budget urgency measures, the first legislation rammed through the house was to increase petrol levies 8 cents per litre.  For a government that promised no new taxes, they certainly have been creative in finding new ways into your wallet!

I recently issued a press release on the fact that the Government’s misguided housing policy has pushed the number of New Zealanders waiting for social housing to record highs.  The latest figures show 11,067 people were waiting for a social or community home at the end of March - that’s 40 per higher than the same time last year and almost 90 per cent higher than when the National-led Government was last in power.

Although there are market forces at play, the Government’s poorly reasoned policies are also directly contributing to the situation. For example, its lack of tenancy reviews and its refusal to remove troublesome tenants reveal serious flaws in the system that are now being abused.  Changes to private rentals such as ring-fencing losses, proposed extra taxes, and more requirements adding costs, is leading landlords to leave the market, forcing more people onto the social housing waiting list.

I only gave a brief comment on this issue on One News, but it sums up my thoughts: "Labour has always over promised what it could achieve here, and in fact, all it is delivering is more and more failures”.

Furthermore, while the Government is focused on new houses they also need to remain responsible to existing tenants - as I’m quoted saying in the Herald.  The lady in this story, Maureen Ansell, is a case in point.  Sadly, as a constituent MP, I see this often and while I’m always happy to intervene, it shouldn't be happening in the first place.

On a more hopeful note, it was good to join a panel at National’s recent Lower North Island conference to discuss housing.  It was a welcome chance to reaffirm National’s principles; the importance of a place to call home and that we are best as a property owning democracy. 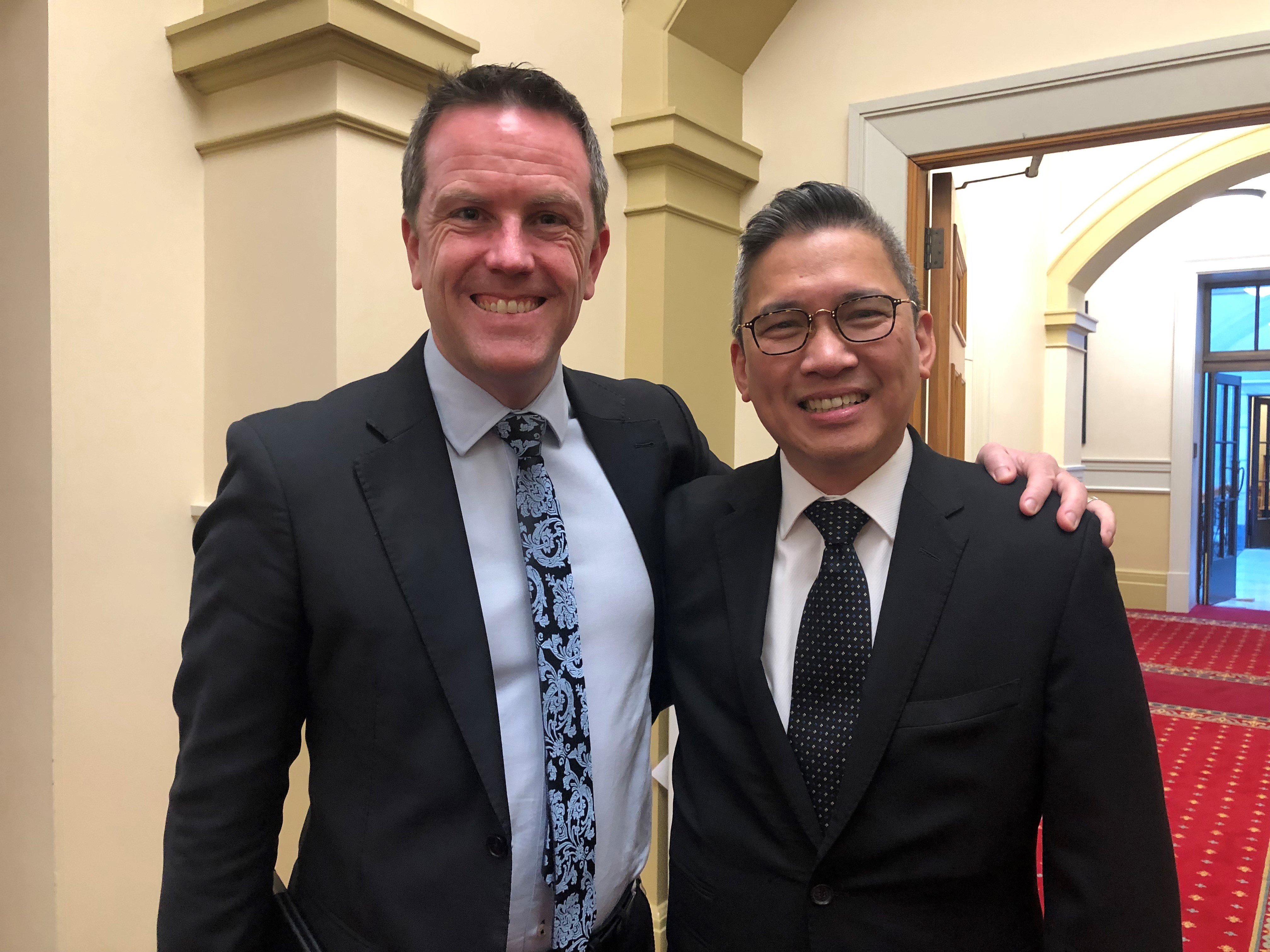 Congratulations to fellow National MP Paulo Garcia for becoming the first Filipino New Zealander in the House of Representatives. Paulo’s background is in law and he has served as a Barrister in the Philippines. He has served as honorary consul of the Philippines in Auckland since 2012 and stood in New Lynn in the 2017 election. I’m happy to have him as part of the team and look forward to working with him. Watch his powerful maiden speech in Parliament here.

Finally, some cautious good news around the unpopular changes to Tamaki Drive proposed by Auckland Transport. It appears that Auckland Transport is taking on board the communities’ feedback and is approaching its changes far more cautiously.  We are not out of the woods yet, by any means, but thank you to everyone for their voices and support to date. Read more about it here.

I enjoyed the closing day at St Heliers Bowling Club along with Councillor Desley Simpson and Colin Davis from our Local Board. I cannot claim having won any of the trophies, but congratulations to all those who won! A very successful season for the club.

Help me send the message that drugs and roads don't mix! Please consider signing this petition to ask that there be roadside drug testing!

On Monday, 17 June, I will be hosting a public meeting (Can we afford Budget 2019) with my colleague, Alastair Scott MP.  Please come along for what will be an enjoyable and informative evening.

I’ll leave you with my thoughts on the Australian election.

What a result! The Coalition has been returned to the treasury benches, something very few people predicted.

In fact, had you been reading the various newspapers, watching television, political analysts, twitter and other social media, you would have thought that Labour, climate change, and green issues were all destined to win the campaign decisively. To push the point, there was really no debate in mainstream media or social media. It was just a matter of how much the new wave of liberal, social progressive, green dogma parties were going to win by. It was Labour’s “unlosable election”.

Confounding the pollsters, the media, the politicians, and pundits, the result was an overwhelming win for conservative Scott Morrison and the centre right coalition. This win deserves some serious consideration because it again demonstrates just how out of touch the commentariat are these days.