Where does the time go!  It has been a good month since I last had the time to write a newsletter, and as I write today, we are now into August.  As my wife often tells me – “the days are long, but the years go quickly.”

There is no shortage of information to share with you, from local news through to what is happening in parliament.  The last few weeks have been intense, with many Tamaki locals in touch for assistance or to share their concerns.  I did a quick count of my emails from last week alone, and I had responded to over 500 individual messages.  The majority of messages are locals raising their displeasure at government policy – from the ever-increasing cost of living, the rising gun crime, lack of housing, or as with an email today – parents upset that their kids are leaving the country for better opportunities.

Not all has been hard work though.  Rachel and I did take a long-planned break to Rarotonga for a week.  This was a wonderful break and the first time I have been to the Cook Islands.  It was a welcome opportunity to go ‘off grid’, although I was struck by just how many Tamaki locals we bumped into.  While on holiday, it would be fair to say that a few constituent semi-clinics were held!

It is always a risk to say ‘these are the big issues’, but two in particular stand out to me.  These are crime and the state of our fire service.  You have seen yet more reporting in our local paper about crime increasing locally again, with a number of businesses having their doors smashed in and shops burgled recently.  I was pleased to provide comment to the East & Bays Courier and have also visited the owners of many of the businesses affected.  As with the ram raids in recent months, these business owners have already been doing it tough, and having their livelihood attacked, and incurring the extra costs of damage is almost taking them to the brink. 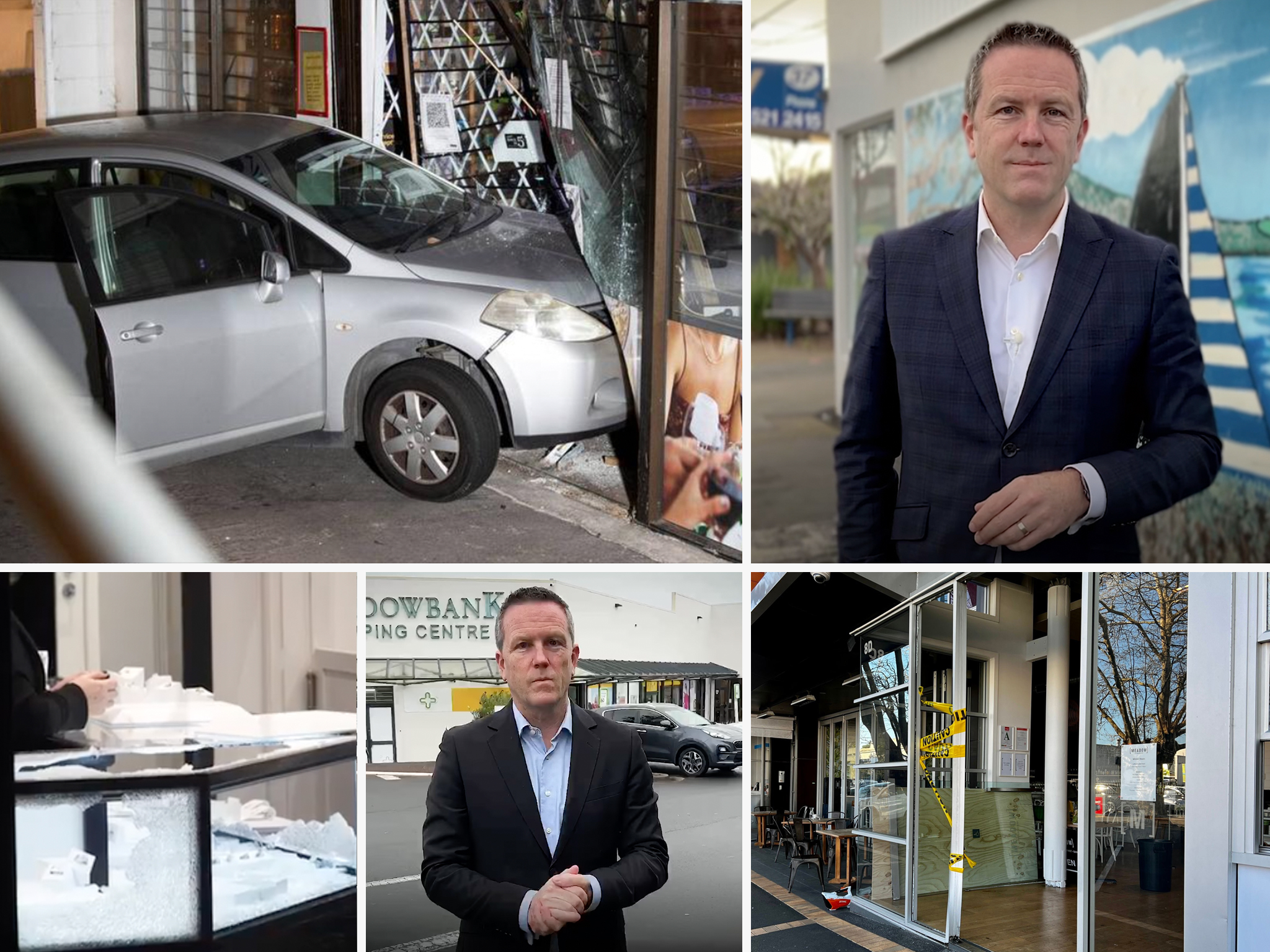 It is not possible to say that one thing is the cause, but I do see two factors at least.  One is the role of social media and young people seeking notoriety by recording their crimes.  The other is truancy, with over 50% of students around the country now being absent from school on a regular basis.

On the positive side, our local police have apprehended those responsible and as implied above, they are juveniles.  I thank police for their work but I can also see clearly that more must be done by this government to address the behaviour of these youths.  Put simply, there needs to be real consequences for them and their parents, but also an ability to intervene and provide the help these young people clearly need.

I mentioned our fire service as well, and if you have been driving past our St Heliers station you will have seen various signs up on their doors including that for several days, they have been closed.  The signs often read: ‘undervalued, underpaid, understaffed’.  This sits clearly on the shoulders of the Labour government.  Fire and Emergency NZ (FENZ) has a $200 million surplus this year and yet seems unable to ensure our fire stations are fully and properly manned.  I have been drawing as much attention to this as possible, and will continue to do so.  It is unacceptable that the only fire station within the Tamaki electorate is often closed! 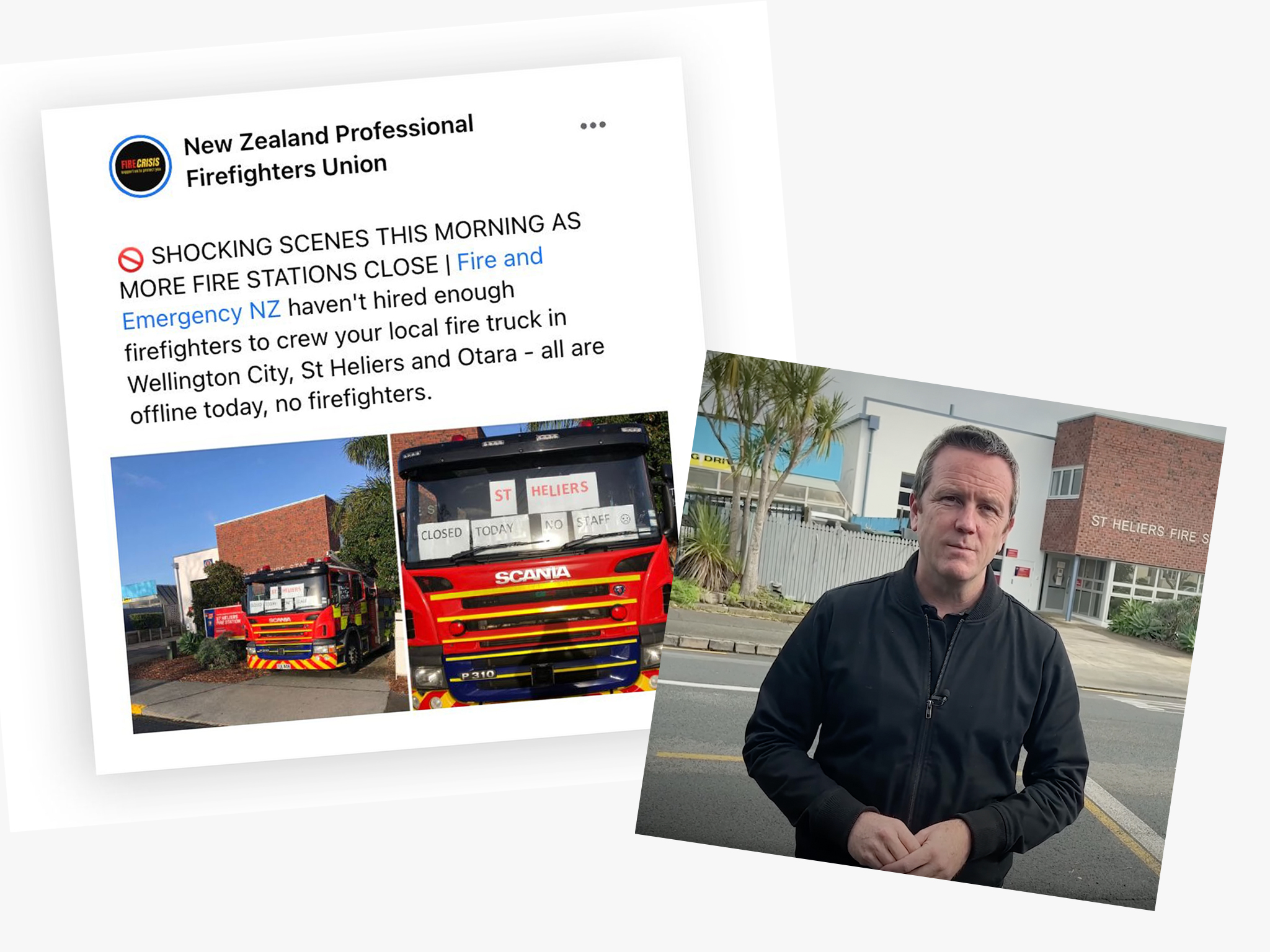 Some good news though, although also a little sad.  The Orakei community is to say goodbye to Jay and Kusum from the Orakei Superette.  After over 30 years, they are looking to retire and have sold the business.  I popped up to see them last week and gave my thanks for the generous way they have served the community for all these years. 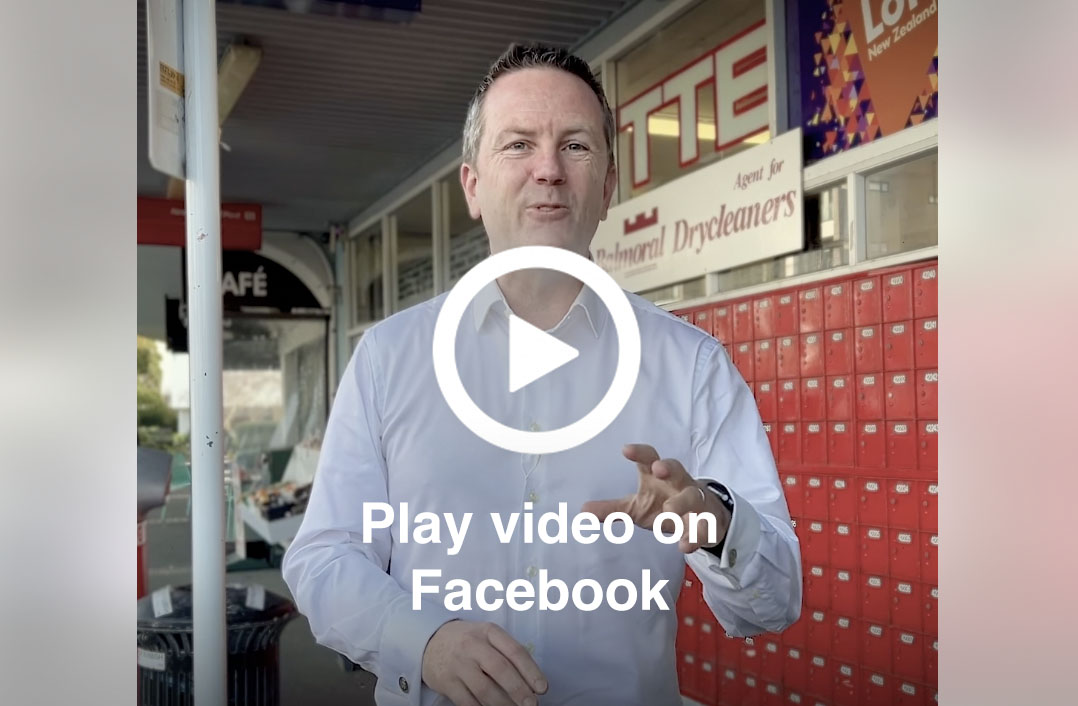 I don’t even know where to start with what is happening in parliament as the Labour government is dropping the ball on so many issues that there is almost a limitless list to share.  There is of course the soaring cost of living, higher inflation, the encouraging of division within the country, and the eroding core democratic principles.  The latter is particularly concerning at two levels.  The first are two bills before parliament granting particular ethnic groups a higher proportional vote, directly undermining the ‘one person one vote’ principal.  The most striking is the Ngai Tahu bill which in effect gives a local iwi extra and appointed councillors over and above what is voted in democratically by the general population.

The second issue is the government’s attempt to “screw the scrum” around electoral rules.  They are moving to change how much money you can donate before having to have your name in public.  Currently, a business for example can donate up to $15,000 but the government wants this to be at $5,000.  Like a lot of left-wing activity, they are keen to expose - and I would suggest name and shame, harass and cancel - those they disagree with or who oppose them.  You can check out my speech on this here. 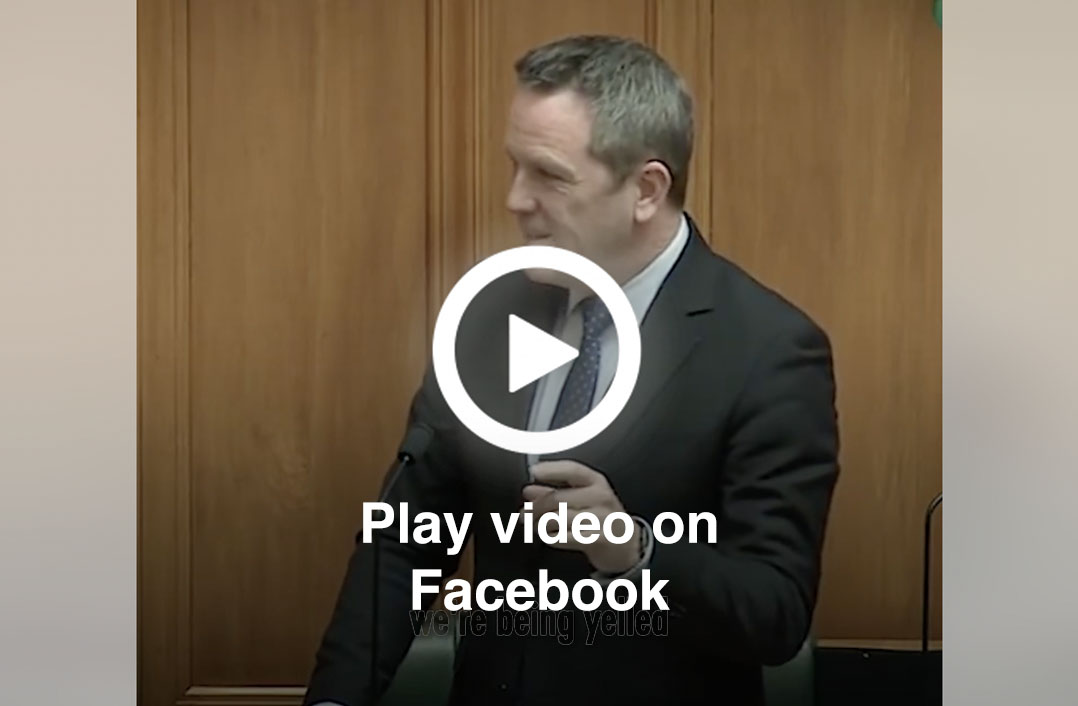 Narrowing things down to my portfolios, things have been particularly busy within Corrections including being on TV One News.  I was drawing attention to Labour spending more and more money on rehabilitation, but delivering far fewer services.  This is typical Labour.  I have also been drawing attention to how many contraband phones are in prison or drones being used over prisons.  With both, Kelvin Davis is absent and has nothing to say.  Finally, I have been alerting media to the fact that Corrections is short 1,500 staff.  Yes, you read that correct - 1,500 fewer staff than needed.  So as Kelvin releases more inmates out of prison and into the community, crime goes up, and those in prison are able to run riot (almost literally, as assaults on staff and prisoners remains exceptionally high).

I have attracted a bit of media coverage on Corrections issues in recent weeks, including on TV One and on Stuff. 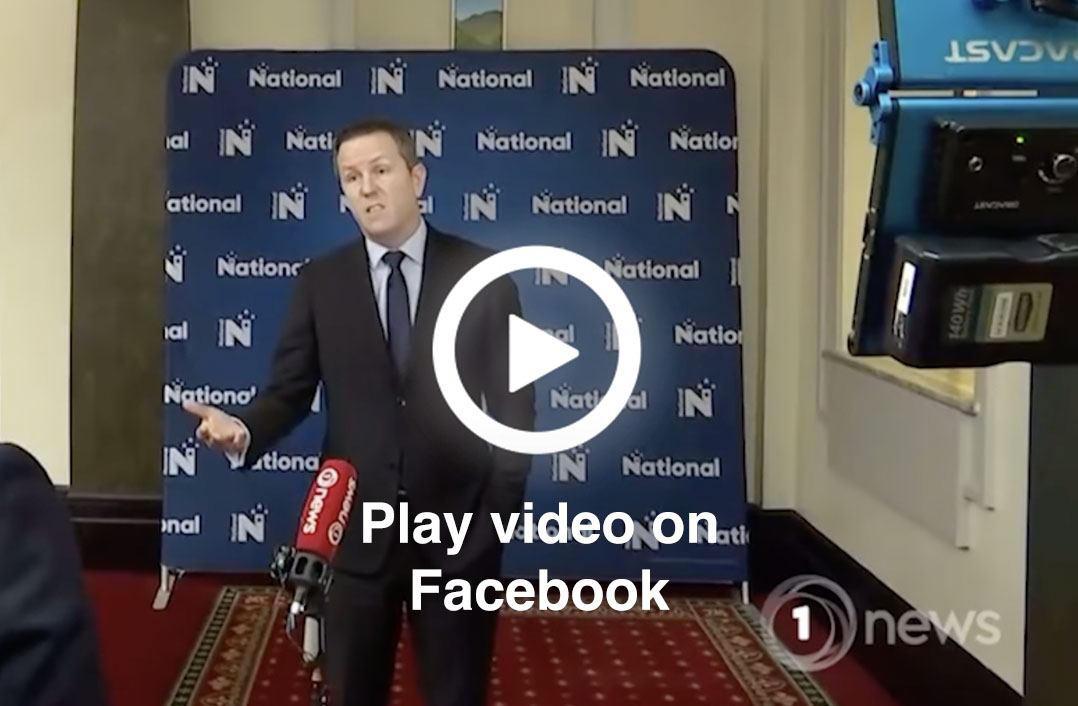 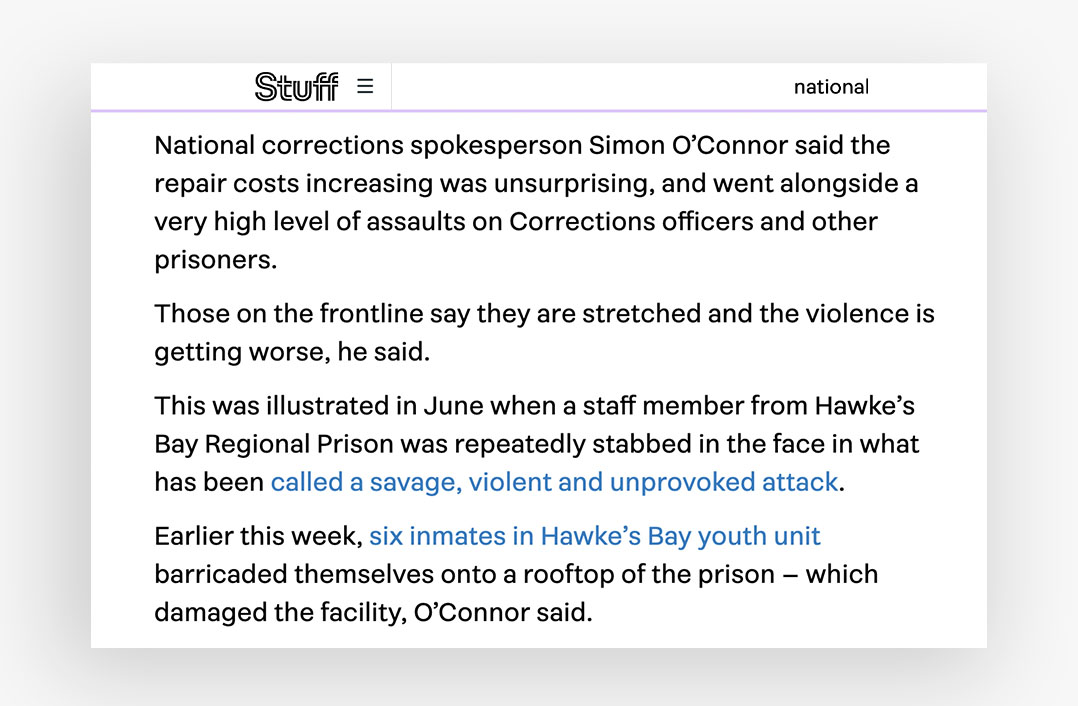 I am also continuing to focus on foreign affairs matters, recently speaking in the House about the free trade deal between the United Kingdom and New Zealand.  I recall meeting with Liz Truss over a private lunch when she was the UK Minister of Trade (and now aspires to become the UK’s next PM) that we must seek trade not simply in economic terms, but also as one of national security and sovereignty.  As New Zealand comes under increasing pressure from the likes of Communist China, we must ensure our trading with allies is robust.

I have recently written a small op-ed around China’s reaction to Speaker Pelosi’s visit to Taiwan.  While a matter specifically between the Chinese and Americans, I point out a salient aspect that New Zealand and other democratic countries need to keep in mind.  You can read my thoughts here 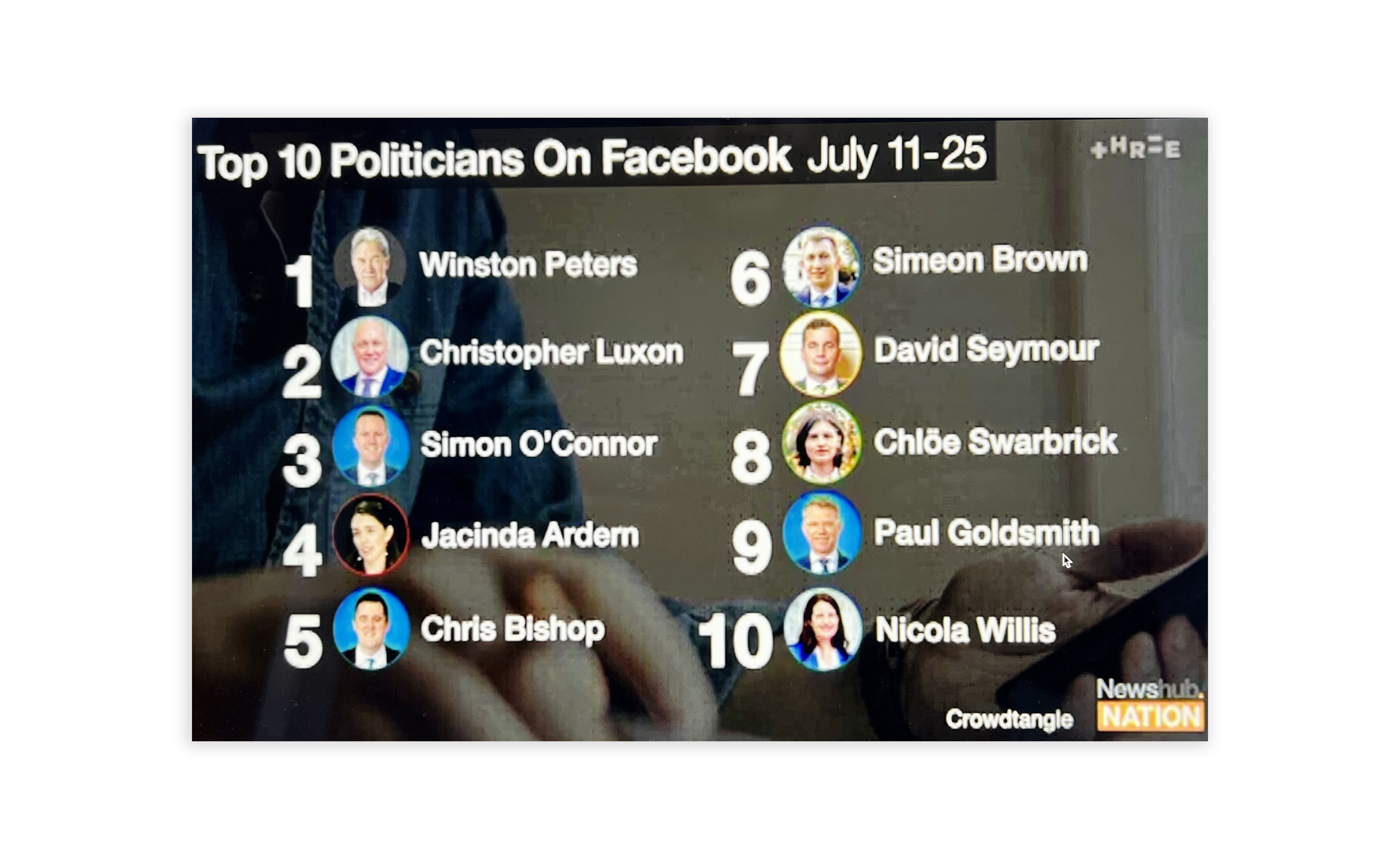 I am excited to let you know that my social media has really taken off, so if you are not yet following the likes of my Facebook and Instagram, you should.

I have one of the largest social media engagements now in the country, often just behind the Prime Minister.  The other week I was number three of all politicians which is rather humbling.   I am often asked about bias in mainstream media and how little they report centre-right/conservative issues.  As locals know from my various public meetings and engagements, I see the place of social media as key - using this to get our message out.  In recent days I have made sure to draw attention to the youth crime affecting our local businesses, with the East and Bays Courier running an article on the issue. 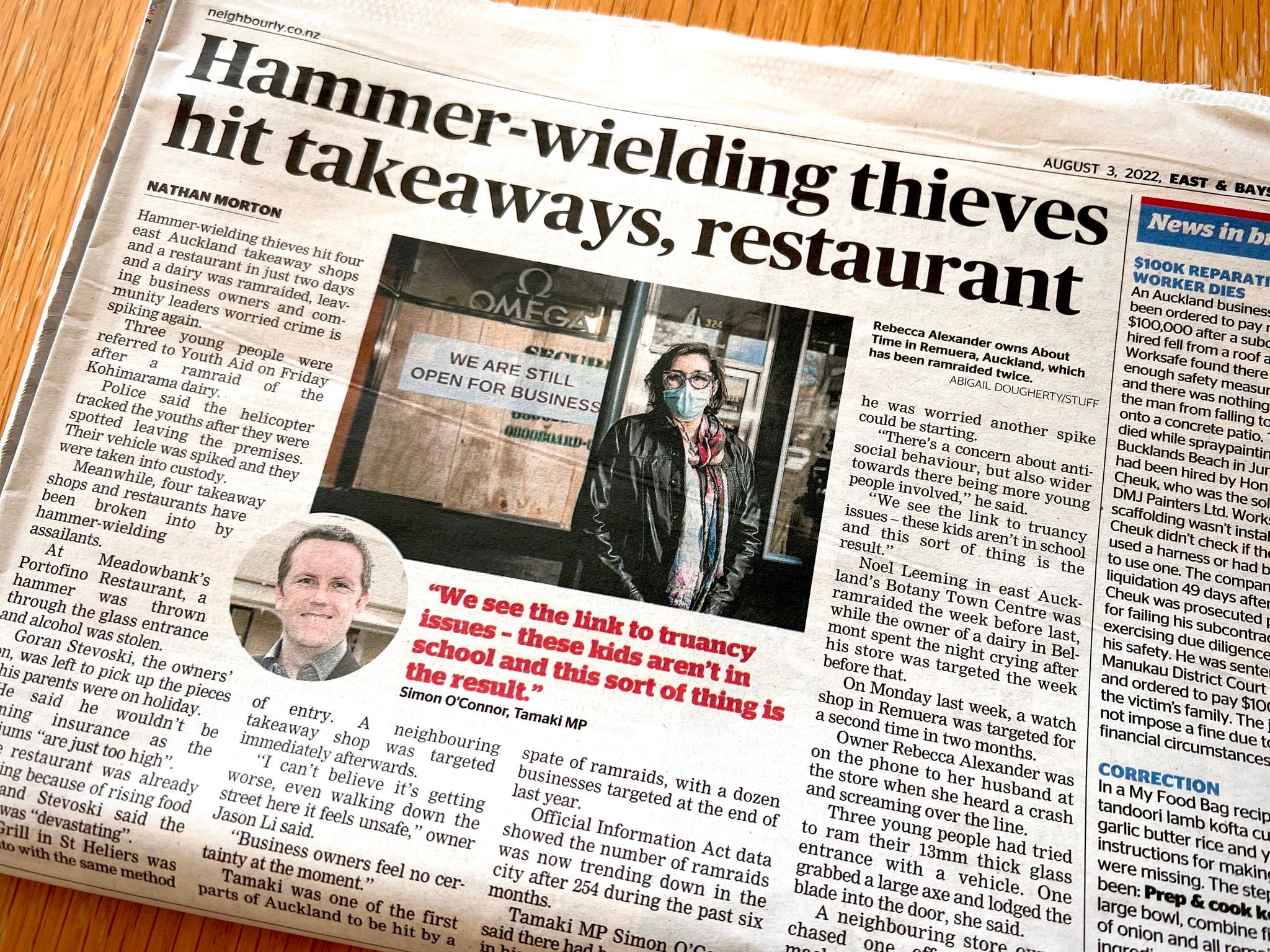 I will continue to post my opinion pieces on topical issues, post videos, and update people on what is happening around Tamaki and New Zealand.

With best wishes for the coming weeks. Please drop me a line on any matters or issues on your mind.