This final newsletter of the year is first and foremost a chance to say a big and heartfelt thank you to everyone for their support, advice, and feedback this year. It has been very much valued and appreciated, particularly in recent weeks with so much going on –  from within the National Party itself to how government policy is impacting the daily lives of constituents and Kiwis in general.

I continue to love this role, but particularly serving the electorate. This hasn’t been so easy the last few months due to lockdown.  As someone who loves people and enjoys walking about, chatting, holding public meetings, and attending functions, it has been quite difficult to be locked inside at home. Granted, the literally thousands of emails and opportunities to make a difference –  constituent by constituent, family by family – has been something I have deeply valued.

These personal reflections, however, do not take away from the struggles many locals and New Zealanders have faced and continue to face. I have often written of those in business, families who are struggling, and loved ones still stuck overseas and unable to come home, amongst many other distressing issues. I haven’t been always been able to find a way to navigate through the arbitrary Government rules, but pleased to say that in many cases I have been of some help. While parliamentary life is all about the big picture, I believe that any picture is made up of many single engagements and acts of assistance.

Once again, I thank everyone for their engagement with me this year. I continue to manage my own email and social media as it allows me to directly read, hear, and see what people are saying. It can be a big task, particularly as my social media has taken off (regularly now in the top five MPs), but one I thoroughly enjoy.

As everyone knows, National is ‘under new management’ with Chris Luxon our new leader and Nicola Willis our deputy. It was a relief to have this sorted simply and without fuss; I think this underlines our unanimous desire for unity and purpose. As Chris himself has noted frequently, it is time for a reset and to put the last four years behind us. It is also time for National to focus on what Kiwis are crying out for and to address the major problems the Government is either causing or ignoring. With all focus on COVID, little attention has been given to the economy, rising debt and inflation, growing gun crime, truancy, more drugs on the street, and so on.

My roles have expanded further, with the Corrections portfolio now under my watch. This sits alongside my work in Foreign Affairs, Customs, and Arts, Culture & Heritage.  A lot to keep me busy! 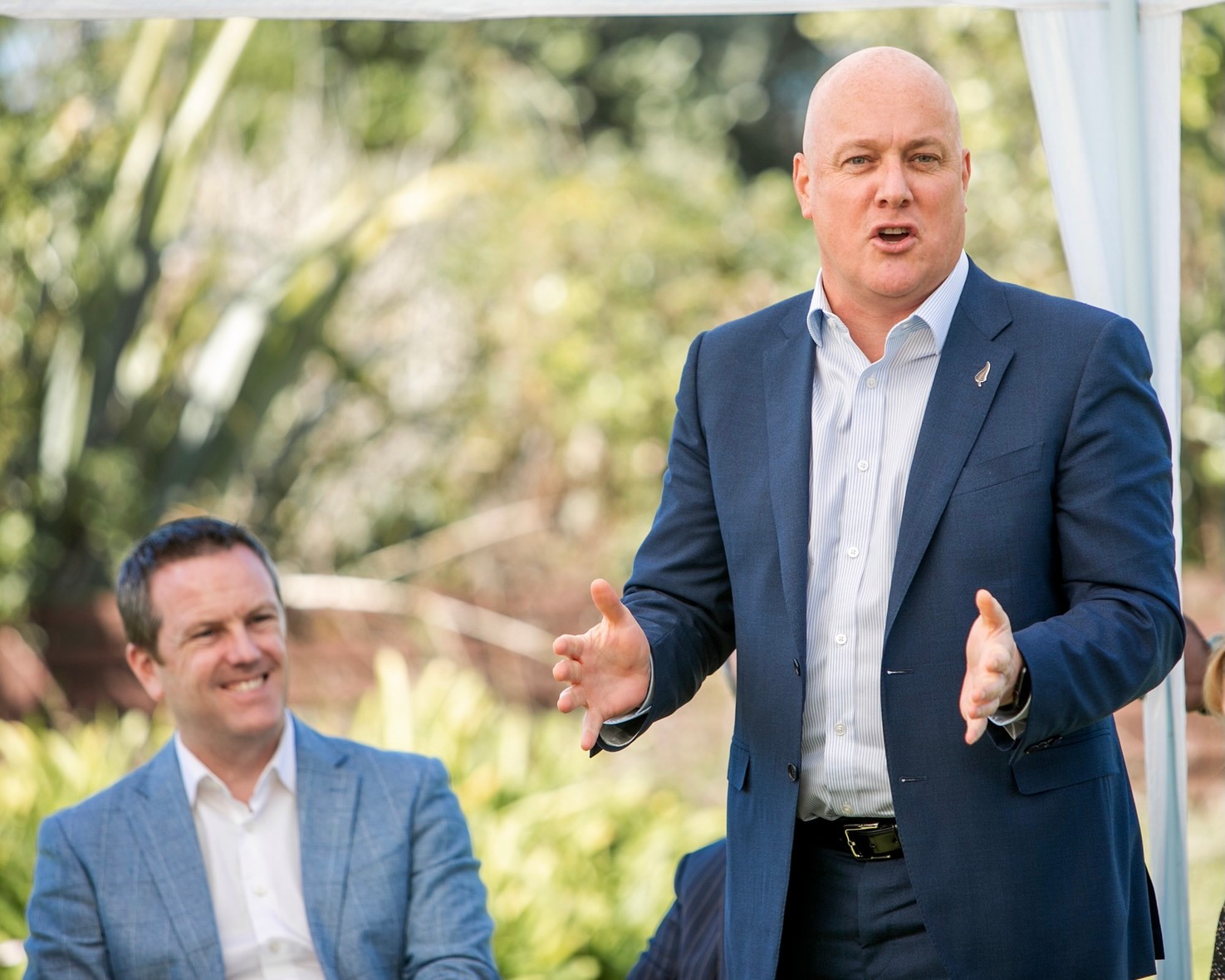 As another year ends, it is a welcome time to reflect on some of the successes both in Tamaki and in Parliament.  As I mentioned earlier, many of these simply stem from the day to day interactions and assistances required by locals, from finding out information for local businesses to enable them to function, or providing pathways and support for families to see dying relatives.

It has been fantastic to facilitate several public meetings which contributed to the formation of the Eastern Bays Community Patrol. My thanks go to Claire and her team for their hard work. This patrol works alongside the police, providing them information on what is happening locally and enabling them to respond to suspicious behaviour. My thanks to all the locals who have joined! 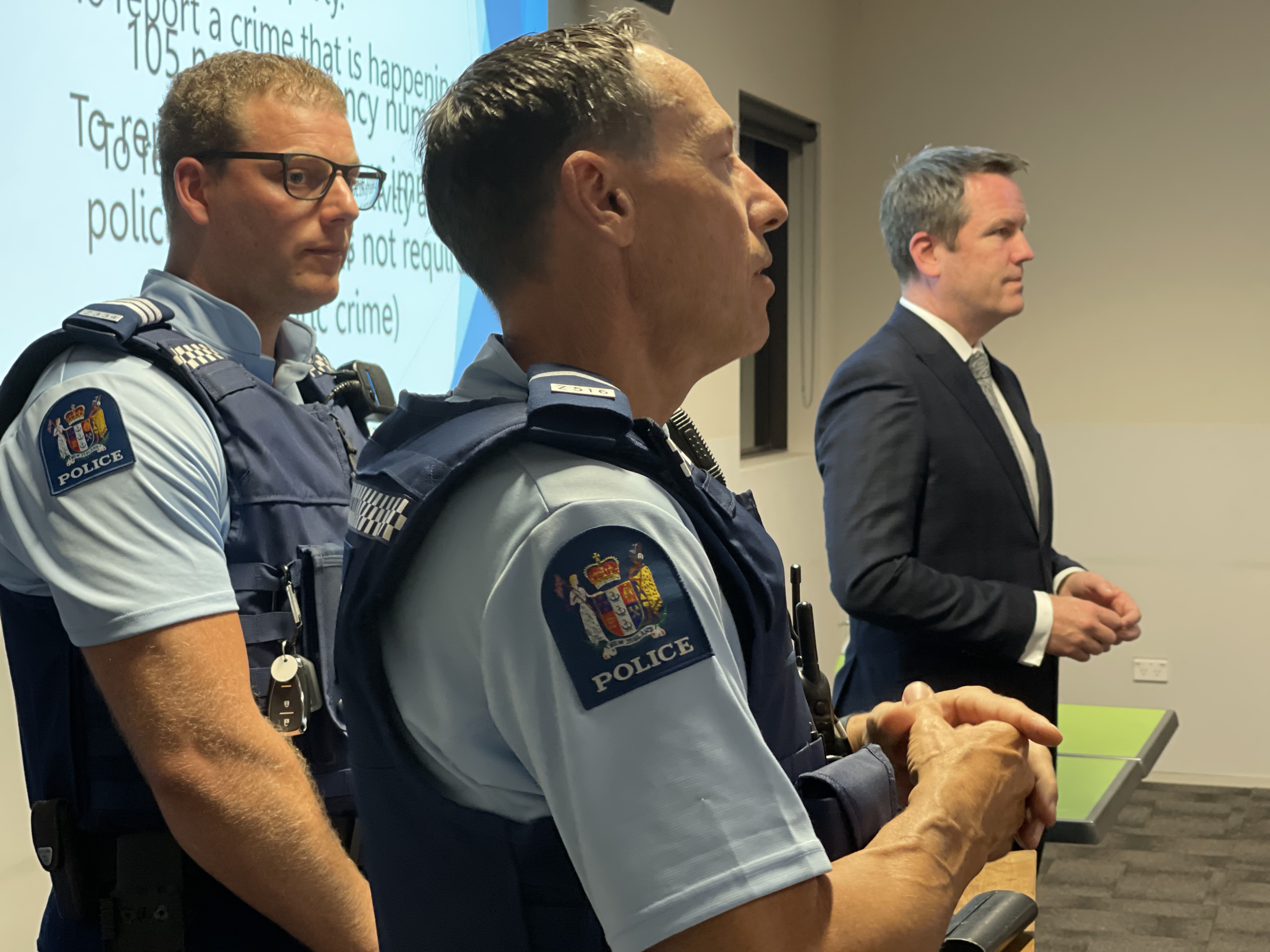 Pleased to play my part in establishing the Tamaki Community Patrol.

One very particular local case I can share was assisting with a regulation change to allow new owners of existing businesses receive government support. This specific case related to the Mission Bay Café; as some of you may know, Mark and Tracey sold their business to Eco and Hasan after 23 years of service. Unfortunately for the latter, because they were new business owners, the support from the Government (known as the COVID Resurgence Payment) was ceased. I spoke up about it in Parliament and  am pleased to say, the government has since changed the law to allow new business owners to get the support they need. It is hard enough to be in business these days without these hurdles, so it was great to show them my support in some small way.

You can click here to watch my speech in Parliament asking that new business owners of existing businesses like Mission Bay Cafe have access to government support.

It was important for me to ensure Auckland Transport were able to get specialist workers into Auckland (and across the border) to complete the project in St Heliers during lockdown. There has been much discussion about this project, but once it started it needed to finish on time. Our businesses have struggled enough without having road works continue into the Christmas season and impede business.

I was also pleased to play my part to get cricket back on the table during lockdown. I had been informed by locals that it was ‘banned’ by government while other sports were given permission to proceed. Credit where credit is due: after I engaged the Minister of Sport, he and Sports NZ responded quickly and with positive news.

Relating to the Internal Affairs portfolio, I was pleased to be part of a movement to stop the National Library from donating over 600,000 books to a group known as the Internet Archive. The idea you a reputable institution such as the National Library could give living author’s books (with copyright) away to a group largely thought of as ‘internet pirates’ is also patently absurd.  As I say, it was meaningful to have joined key people in the sector to stop this deal going forward, albeit temporarily.

It may be a little known fact, but I also now sit on the Lottery Grants Board which is responsible for the tens of millions of dollars that Lotto NZ generates for the community. I better stress, I am not responsible for the particular decisions, but rather on the wider distributions that enable others to then decide which sports group, marae, charity and so on gets assistance. It is a deeply satisfying role.

The parliament is coming to a close in a few days. It has been a full on, strange and bumoy year, to say the least. Like many of you, I got used to using Zoom to get a lot of my work done. My only comment is that much more work needs to be done to stop the excesses and overreaches of government. They have an outright majority and, consequently, are allowed to govern. However, this year we have seen government give itself enormous powers through rushed legislation with little to no oversight by Parliament. We have seen bills rammed through in Urgency; no robust select committee process; no opportunity for public input (or very limited); and so on. To say the least, this is constitutionally disturbing and not right. Moreover, it is one thing to use your majority to implement legislation, but another to ignore the very people who voted you in, which this Government has been doing.

Next year, Parliament will resume in February. I can confidently say that myself and the rest of the National team will be ready and roaring to go. 2022 is the year for National to speak to New Zealanders and for New Zealanders,

I have continued podcasting and am pleased to see the number of followers is growing; in fact, I am going up in the charts for the most engaged political podcasts in New Zealand. I am lining up some more guests as I write, including former Australian Deputy Prime Minister John Anderson, to talk about freedoms and rights. I also have speakers from the highly-respected Legatum Institute joining the podcast soon to discuss how prosperity is based on key and foundational constitutional values. 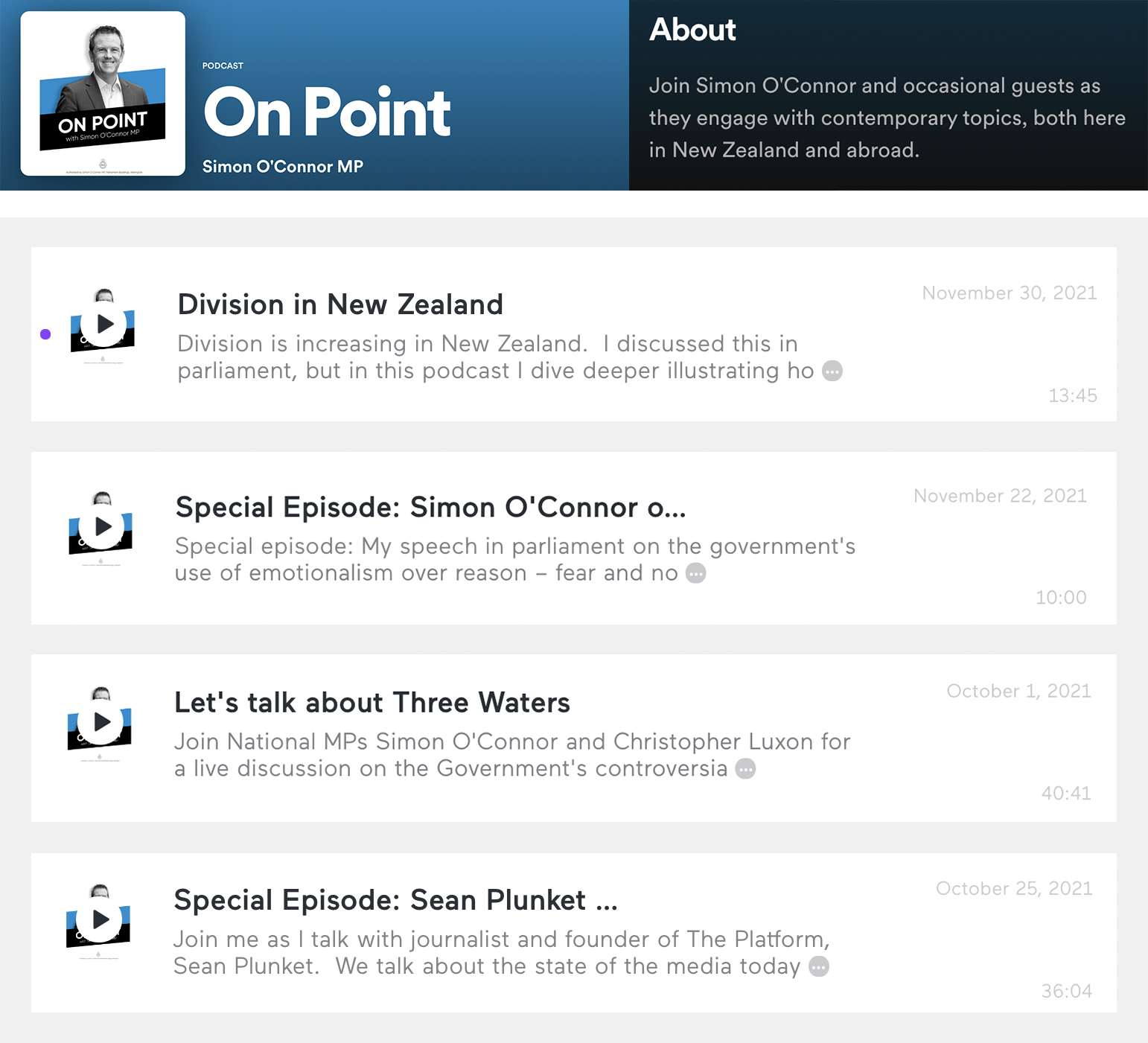 I will take a break from podcasting over the summer, but you can find all my episodes HERE while keeping an eye out for new content in 2022.

In the meantime, I wish you and your family all the very best for the Christmas season, summer, and the start of 2022.